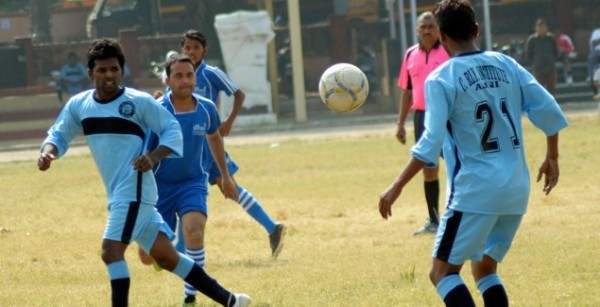 In the 32nd min of the first match, Shahbaz Sheikh of Central Railway Institute drew the first blood and Rigon Simon found the net in the 35th min where as Mouzammil of GNIT earned a lone goal in the 60th min. Also, red card was shown to Sharique Kamal In the 19th min by referee to signify that he has been sent off.

Moreover, within fifteen minutes, Hitesh Lengule netted the 2nd goal. After a change of ends, Rupesh struck the goal and increased the lead 3-1 wherein Malcon Swami of Martin Nagar scored only a lone goal in the 28th min.In the 60th minute, Rohit Tiwari received the red card by match referee.

In another tie, Birsa Munda downed Hill Top 1-0. Nitish Rautel (60th min) was the goal scorer. During the proceedings, Nitish Rautel of Birsa Munda and Arun Yadav of Hill Top were cautioned by referee in the 65th and 55th min.
Schedule for Tomorrow’s match: