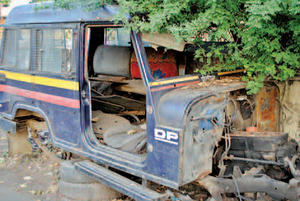 Nagpur News: A scrap dealer at Nagpur has an out of use police vehicle bearing the designation and registration in the name of police commissioner.  This is a matter of serious concern as the vehicle may be subject to misuse. It is evident that in the event of any unexpected activity through this vehicle, the RTO could produce nothing except the registration in the name of Nagpur Police Commissioner. Interestingly, the concerned officials are trying to rub the shoulders off their responsibility in this matter, passing the buck on each other. The vehicle with registration number MH 31 AG 9029 is parked at a scrap dealer’s place at Dobi Nagar in Mominpura.

As per the rules, any police vehicle once it has completed the driving cycle of 10 years or been driven for at least 2.60 lakh kms is termed as “non-useful” and auctioned thereafter. However, the auction is done only after the IGMT Pune grants permission for the same. A series of discrepancies have been revealed in the entire auction process.

The police jeep parked on the roadside at Dobi Nagar points to high degree of irresponsible behavior on the part of police department.

The vehicle was auctioned in March 2012 from the city motor vehicle department office located at police line Takli. The auction was made out of lot no. 17 in which about 175 vehicles brought from Nagpur and entire Vidarbha were sold off. Out of these, 83 vehicles were from police department that included 4 cars, 2 large cranes, 34 jeeps, 42 motorcycles and a light van while the rest vehicles belonged to CRPF and places like Wardha and Bhandara.

Worth mentioning is the fact that these vehicles cannot be sold in scrap keeping in view of its possible misuse. However, sidelining this fact the vehicles are carelessly auctioned. Interestingly, more often these vehicles are often bought at such a high prices that almost equals the price of new vehicle. This adds to the suspicion about its.
Anil Deshmukh, police inspector at city’s motor transport office however said that it amounts to criminal offence not to remove the identity of police vehicles purchased in auction, but he skipped answering the question regarding the jeep stranded at scrap dealer’s place.

When contacted in this regard, sub-regional motor transport officer Sudharkar Dani told that no letter pertaining to cancellation of registration number (MH 31 AG 9029) of the said auctioned jeep has been sent to RTO office by the city police’s motor vehicle department. A scrap dealer Riyaz Ahmed has bought this vehicle in auction. As per rules, it is the duty of police department to ensure erasing identification from such vehicles after it is auctioned but it has turned a blind eye towards this concern.

As per the procedure, no-objection certificate from CP is also issued to the buyer after the auction. However, neither CP remains present during the sale nor the TTO form bears his signature. On the contrary, the police chief does not even know whether the vehicle that was sent by state government in his name, are auctioned or disposed. Informed sources revealed that it is compulsory to provide the registration number and model of any police vehicle before clearing it for auction. But even this point is finely ignored during the process.

Anil Deshmukh of city police motor vehicle department informed that once the vehicle is purchased, the onus lie on buyer to vanish the identity of vehicles. The concerned police station may take action against any such buyer who fails to comply.