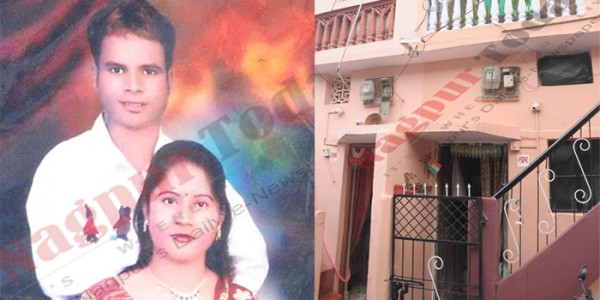 Tensions ran high in Kushi Nagar area under the jurisdiction  of Jaripatka Police Station when a couple was found dead in their house. Mystery shrouded their deaths as neighbours could not believe the couple dead. In fact, three lives were lost, as very unfortunately, the woman was pregnant (3-4 months).

According to police, the incident involved the couple Rajesh Meshram (32) and Monica Rajesh Meshram (28), residents of Plot No. 267, renters of Rajendra Awasthi, Kushi Nagar. The shocking incident got exposed when the landlord Rajendra Awasthi and his son noticed the doors of the couple’s house closed even after 11.30 am. Sensing something aghast, both knocked the doors repeatedly but did not get any response from inside. The father-son duo then immediately rushed to Jaripatka Police Station and informed the police about suspicious situation.

Jaripatka police, too, rushed to the spot and first knocked the doors repeatedly. When they, too, did not get any response, they broke open the door and entered the house. To their dismay, Monica was lying on the floor dead, and Rajesh was found hanging to the hook of a ceiling fan with a nylon rope in kitchen. The couple’s 3 year old daughter was at her aunty’s house in Mecosabagh Church Colony at the time of the incident. The police completed the paper formalities and sent bodies of Rajesh and Monica to the Mayo Hospital for post-mortem.

The horrible incident created a sensation and tensions ran high as the news of the couple finding dead spread like a jungle fire. The nearby residents rushed to the house of Rajesh Meshram and Monica Meshram. The residents were not digesting the fact and were grimaced as they had known that Monica was pregnant.

When the Nagpur Today scribe Ravikant Kamble contacted PI Bhatkar of Jaripatka Police Station for further information, the PI informed that the case appears to be the fallout of Rajesh suspecting Monica’s affairs with another person. But it is just a surmise. The post-mortem report would reveal the actual cause of deaths and further course of investigations into the incident would be decided.

Sources said, the possibility of Rajesh murdering Monica over the suspicion of Monica’s affairs, and then committing suicide could not be ruled.

The unfortunate incident cut short lives of two young persons, and, also the baby. The 3-year old daughter’s life will also not be smooth.