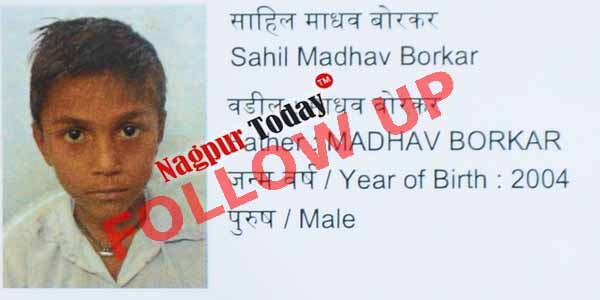 Nagpur News : Investigations by Sonegaon police team have confirmed that months before, a serious argument had taken between Nitin Borkar, father of 11-year-old Sahil who was abducted and killed, and accused Santosh Patil.

Demanding Rs 2 lakhs ransom from a salon owner is not digestible for cops and thus police are probing all possible angles in the case of kidnapping and murder of 11-year-old Sahil Borkar.

“It’s true that around five months before, Borkar had an argument with Patil while he was staying as a tenant at Borkar’s neighbour. The reason behind an argument is yet to ascertain,” said police. Patil was prdocued in district court on Wednesday and was granted police custody till June 16.

On Monday, Sahil, a fifth standard student, was kidnapped by Patil while he was playing with his three friends near his house a Khapri. After hunting for whole night for Sahil, police were helped by Sahil’s friend Harsahd Sahastrabuddhe who took them to Patil’s house. Harshad had seen Patil taking Sahil with him. After six hours long interrogation, Patil broke and took cops to Sahil’s body covered under a heap of stones in the puddle at an open area near MIHAN flyover on Tuesday afternoon.

“Kidnapping a salon owner’s boy for ransom of Rs 2 lakhs is bit hard to digest. If Patil urgently needed the money, he would have planned for some businessman’s son. We are trying to confirm the ransom angle in the case,” said senior police in-charge, Tukaram Wahile.

Police told that Patil used his friend’s bike in the crime. “He borrowed the bike from his nearby friend and went to take Sahil at his house. He lured the boy of cold drinks and snacks and took him at his room where he gave a liquor mixed cold drink to Sahil before killing him,” told Wahile.

Patil had repeatedly pinned down Sahil under water till he died and later covered him with stones. Later, after taking bath at home, he made the ransom call at around 9.45 pm.

Sources said that Patil, who hails from Risod in Washim, is infamous for duping many people. Khapri residents informed that Patil has relocated in city from past one year and works in a private company at Gumgaon.

Sources informed that he would dupe people of thousands of Rupees under the assurance of providing them a job in police department.

Wahile told that Patil had borrowed two SIM cards-one around a month before and other a fortnight ago. Cops are ye to check when he activated those SIM cards and their call details records.