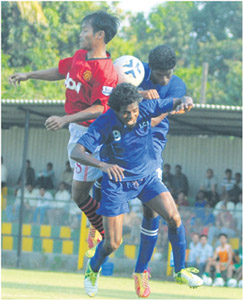 The day belonged to Bhoratt who fashioned Southern Railway’s big victory by scoring hat-trick. Southern Railway were leading by 2-0 in the first half. Bhoratt drew the first blood in the eighth minute. Three minutes later once again he struck. After a change of ends also Southern Railway continued to play attacking game. On the other hand their opponents looked hapless. In the 47th minute, Bhoratt completed his hat-trick through fabulous goal. Then within a span of three minutes, Southern Railway pumped in three goals. The fourth goal for Southern Railway came through Tamilalagan in the 50th minute. Then in the very next moment Amjad Asheer found the net. In the 53rd minute Unnikrishnan netted the goal and ensued big victory. In another tie, ICF were leading by one goal in the first half and it came through Venkatesan in the 39th minute. An equaliser for NFR was scored by Jitendra Brahwna in the 70th minute.