Nagpurians, from all sections of society, thronging the vendors selling the delicious stuff to quench thirst and, the vendors, too, thriving by earning hefty money from the business 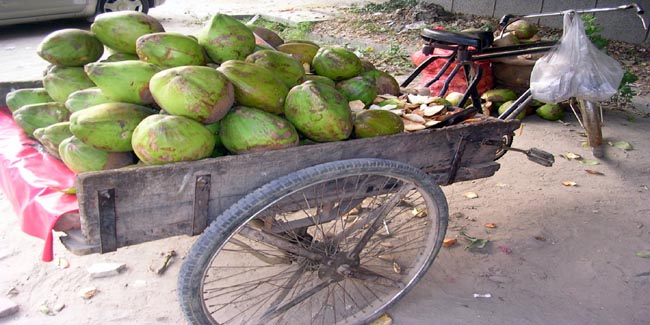 Nagpur News: The citizens of Orange City might be facing severe water shortage due to irresponsible or flawed handling of the situation by the concerned authorities in the blazing summer. The Nature has blessed Nagpur city with abundant water but for the human beings who are creating a hell of mess thus resulting in the artificial and grave water shortage. However, the Nature has in a divine way created an alternative for thirsty Nagpurians, albeit, in the small quantity, and for a special class of people or even for the common citizens to quench their thirst,too. And the alternative is delicious coconut water which is good for health, too.

Even though the coconut water has been sold in good quantity during summer the Nagpur citizens could witness people enjoying the Nature’s gift throughout the year notwithstanding the less number of specific vendors in one area or the other. But the business thrives all the days, all the months in the year courtesy a special class of people. The businessmen, too, earn a considerable amount throughout the year.

The coconut water vendors, too, are a smart lot. They have grabbed vantage points in the big markets or near the hospitals in the city. The rates also vary from area to area. The vendors provide the sweet and delicious coconut water in the range of Rs 20 and Rs 25 depending upon the consumers. The citizens, too, don’t mind in paying the difference as the coconut water quenches their thirst in an excellent manner.

One of the coconut water vendors Nafees Khan said, Nagpur has plenty of people who cherish coconut water daily. A truck carries 15 tons of coconuts and the coconuts are imported from Andhra Pradesh and Bengaluru. The delicious stuff is sold by petty businessmen and the “Thela Walas” in different areas and they have their regular and summer specific consumers who throng the vendors to quench their thirst and, take homes for other family members, too. Nafees further said, the coconut water business is no longer a seasonal one. The business is carried out all through year. More and more health conscious people have come to know about the medical quality of the coconut water, and, most of people frequently demand creamy coconut water because it contains more sweetness. Apart from regular consumers, several people drink coconut water on the advice of doctors. “We earn amounts between Rs 2000 and Rs 2500 on daily basis,” Nafees said with a broad smile.

DOCTORS’ ADVICE: Many doctors prescribe the coconut water to kill the tiredness one suffers from the day-to-day hard work. Nagpur’s eminent expert Dr. Vinod Goutam said the coconut water keeps the body cool and also maintains the balance of electrolytes in the human blood. The precious coconut water contains a large quantity of potassium, calcium, magnesium, sodium, and Vitamins A, B, and C, Dr Goutam claimed. He further said, the cytokines found in coconut water saves a person from cancer, Dr Goutam stated. He advised youths to avoid aerated drinks full of chemicals. Instead, the youths should turn towards natural juices that would keep them fit and healthy, Dr Goutam asserted.