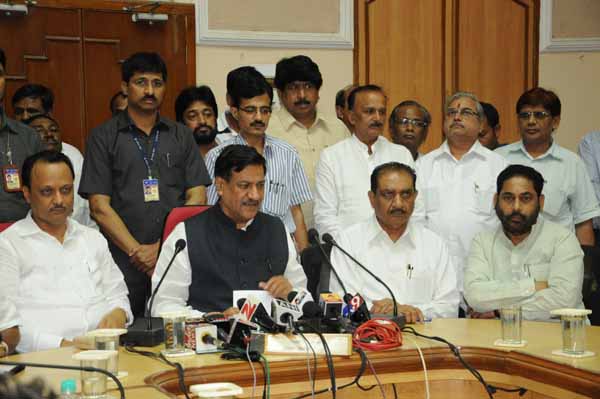 Nagpur News: Maharashtra Chief Minister Prithiviraj Chavan today announced an additional financial aid of Rs one lakh from the CM relief fund, besides the regular assistance of Rs 1.5 lakh to the kin of flood victims in the region.

“Additional Rs one lakh would be given to the kin of the deceased from the CM Relief Fund, besides the existing compensation of Rs 1.5 lakh,” Chavan told reporters here tonight.

Heavy rains and floods have claimed several lives in the region, though official figures were not yet available.

Winding up the day-long tour of the flood-affected Washim, Karanja, Chandrapur in the region, Chavan said a detailed assessment of damages due to last week’s heavy rains was being carried out by the district authorities.

“The divisional authorities have been directed to submit the detailed assessment of damages by tomorrow evening for informing the State Legislature on Monday,” Chavan said. Deputy Chief Minister Ajit Pawar was also present on the occasion.

“The state government will initiate many measures, including cleanliness drive and desilting of rivulets, rivers passing through the city and the civic authorities have been directed to remove encroachment from both the sides, thereby allowing free flow of rain water and clear water logging,” Chavan said.

According to him the height of the protective wall along the river in city areas would be raised to prevent water from entering the city.

The chief minister added that he had appealed to the corporate houses to help the flood-affected people.

He also assured to make available seeds for sowing operations to farmers in the region.

Chavan said, he has directed all the officials of the District Administrations to immediately start restoration of roads, bridges, dams, river banks and other damaged infrastructure on war-footing. The Mining Department has also been directed carry out restoration of infrastructure under their jurisdiction. The industries have appealed to provide assistance on the CSR rate. The Government will decide the course of assisting the industries.

reacting strongly against no invitation to MLAs from Vidarbha for meeting on Vidarbha farmers issue, BJP MLAs resorted to raising sloganeering in front of the chief minister Prithviraj Chavan.

The Chief minister toured Yavatmal, Washim and Chandrapur districts on Saturday to review crop damage due to heavy rainfall. He had convened a meeting of officers at divisional commissionerate here after his tour. Ministers and members of Parliament were invited for the meeting but MLAs were not given entry at the meeting venue due to less sitting arrangement.

The BJP MLAs including Nana Patole, Sudhir Parweand Vijay Ghodmare, Panchayat Samiti chairman Ajay Bodhare, Zilla Parishad member Prem Zade, Sudhakar Dhone and many others reached the meeting venue. But the police stopped them from entering there which led to scuffle between cops and BJP leaders.

Opposition MLAs reacted strongly against no place for them in the meeting. They started raising slogans as soon as chief minister’s cavalcade reached there. Condemning the government, MLANana Patole left the place. Later, the chief minister invited BJP MLAs. They submitted a memorandum to the chief minister demanding him to declare wet drought in Vidarbha and financial aid to farmers.