New Delhi: The Class 12 Hindi (elective) paper being circulated on the social media was “fake”, the Central Board of Secondary Education said on Saturday and urged people not to spread rumours regarding the paper.

The CBSE is scheduled to hold the Class 12th Hindi (elective) examination on April 2.

“A fake question paper of Class XII – Hindi (elective) (enclosed) is being circulated on social media i.e. WhatsApp, YouTube etc,” the CBSE said in a release.

It added that the question papers circulating on these social media platforms were either of a previous year or fake.

“Hence, it is requested not to circulate the news about these fake papers, so that the students and other stakeholders are not misled,” the release said.

The board also enclosed the “fake” Hindi paper, which it said was being circulated on the social media, with its statement.

On Friday, School Education Secretary Anil Swarup had said the re-examination of the CBSE Class 12 economics paper would be held on April 25, while the Class 10 mathematics re-test, if required, would be conducted only for Delhi-NCR and Haryana in July.

The announcement had come after the board received complaints that the question papers for the two subjects were leaked.

Meanwhile, a group of students on Saturday continued their demonstration near the CBSE office at Preet Vihar against the leak of Class 10 Mathematics and Class 12 Economics papers.

A student from Cochin approached the Supreme Court against the re-examination of Class X Maths paper.

Rohan Mathew approached the apex court against the decision of the CBSE to cancel and re-conduct the mathematics exam held on March 28 over the question paper leak.

Mathew sought the court’s direction to the education board to publish results on the basis of already held examination.

He also sought setting up of a special high-powered committee to conduct a detailed investigation into the case. 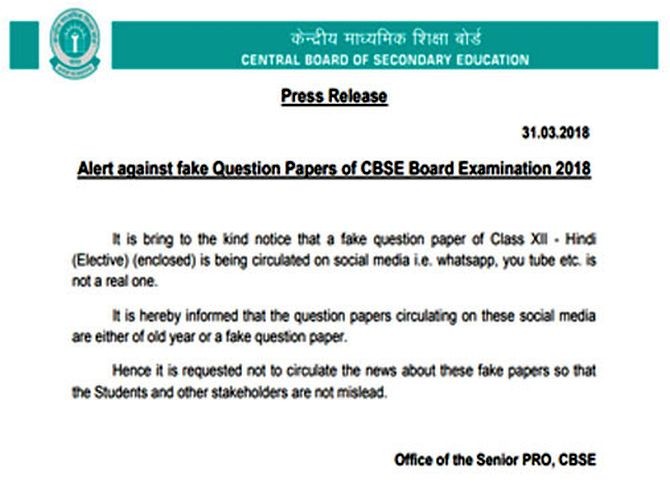 Google sends reply to Delhi Police
The Delhi Police’s Crime Branch has got a reply from Google on the details it had sought pertaining to the e-mail address from where the CBSE chairperson was sent a mail about the Class 10 mathematics paper being leaked, an official privy to the probe said.

A senior police officer said they had got a reply from the online search engine but refused to divulge further details.

Meanwhile, the police continued with their quest to trace the origin of the papers leak as they visited the schools and coaching centres in outer Delhi that had come under their scanner. More than 60 people have been questioned till now, but the officer said there was “no breakthrough” in the case so far.

2 coaching centre directors arrested, 4 students detained in Jharkhand
Six more people, including two directors of a private coaching centre in Jharkhand, were apprehended in connection with the CBSE question paper leaks, police said. Since Friday, 12 people, including Class 10 and 11 students, have been apprehended in the CBSE leak case from Jharkhand’s Chatra district, they said.

The police had on Friday detained six Class 10 students in the case.

The police said that among those apprehended on Saturday, four are students of different schools in the district and two directors of a private coaching centre.

A Class 11 student was detained from the Navodaya Vidyalala campus. He had hid chits containing answers of a leaked question paper in the school’s bathroom, police said.

Two students are from Patna, they said.

The police said that the directors have been put under arrest.