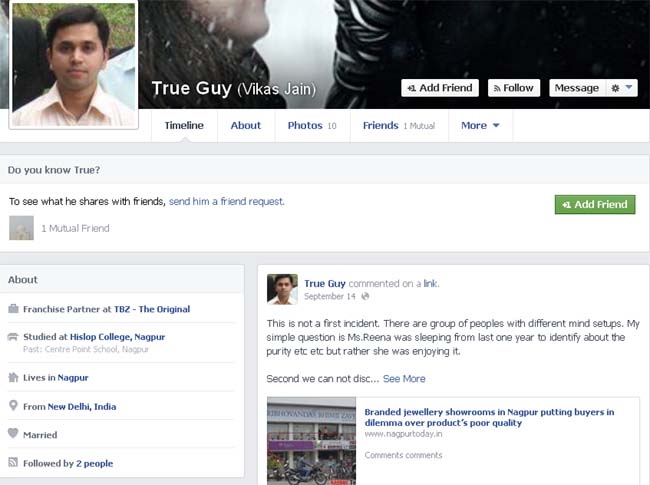 Next time you head for some jewellery buying into a plush showroom of branded jewellery, be sure to ascertain quality as your next visit to the same showroom may back on its commitment. At least going by the comment of Vikas Jain, who claims himself to be the store franchise of TBZ-The original, it appears so.

Vikas Jain, claiming himself as franchise partner of TBZ – The Original on his facebook page named True Guy, has criticized the woman who had complained regarding the purity of the jewellery she bought from the Tribhovandas Bhimji Zaveri and Sons Pvt. Ltd, a jewellery showroom at Poonam Chambers in Sadar area of Nagpur. However Jain has not mentioned the name of the city in his profile. Commenting on the news published on Nagpur Today, Jain even went on to say that some women are fond of making money this way.

Jain even fired at women buyers in particular saying, “There are some cheap people who wanted to make some immediate money upon fluctuating price of gold and women are more fond of it.”

When Nagpur Today brought the incident to the knowledge of Ashwin Kotian, the senior group head of Mumbai based Adfactors PR Pvt Ltd which handles the communication and promotion of TBZ – The Original, he chose to keep mum over the issue. However, he was the one who objected to the earlier news saying that TBZ – The Original is different from Tribhovandas Bhimji Zaveri & Sons.

This has raised serious suspicion of Jain’s intention towards his customers, though the case did not pertain to his establishment. His comments clearly disown any responsibility once the customer bought jewellery and left his showroom.

The comment has drawn enormous flak as Vikas Jain would have given second thought before bickering. One of the customers said, “If the company has offered for 100% percent return on exchange then where the question of ‘wear and tear’ arises? Such a comment not only amounts to false claim but also point towards cheating by coming out with different statement when the customer visits again to return the product against exchange. Don’t claim if you cannot give.”

Commenting on the related news, Vikas Jain even doubted the customer’s intention saying that different people have different setup of minds. He even alleged Reena, the woman in question of sleeping for one year and then coming to examine purity.

Reacting to Jain’s comment, Reena’s husband said, “This shows how desperate Jain is, in making profit while blatantly ignoring customer’s interest. Instead of understanding the customer’s problems, though not related to his showroom, he went on to cast suspicion over customer’s intentions. Not only my wife, he has passed remarks on the credibility of every woman buyer.”

Reena’s husband said that it is the woman buyers who keep the business of any jewellery showroom flourishing. Passing such a comment instead of introspection into the veracity of their own claims points to high degree of irresponsible selling. Vikas Jain has proved that he was more interested in making profits out of tall claims and looting the innocent customers, he added. He commented, “In the light of such a comment from the showroom owner, I would suggest the customers should be alert enough to be rest assured of the quality of the jewellery they are purchasing from his showroom.”

Though the news on which Vikas Jain comment did not pertain to his showroom, his comments over that clearly unveils his selling strategy that indicates non-accountability of any product that is once sold from his showroom. Going by the facts, customers should remain more alert before they indulge in some festive buying.