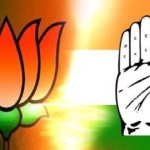 Nagpur: Come January 20, the Second Capital City of Nagpur will witness presence of political bigwigs and also show of strength between Bharatiya Janata Party and the Congress.

The National President of BJP Amit Shah will address a public rally of BJP Scheduled Caste Morcha at historic Kasturchand Park on January 20 at 4 pm. BJP has organised a two day national convention of SC Morcha in city on January 19 and 20. Similarly, top leaders of Congress including Madhya Pradesh Chief Minister Kamal Nath, Rajasthan Chief Minister Ashok Gehlot and Chhattisgarh Chief Minister Bhupesh Baghel would be arriving in city and participating in the concluding day of Congress party’s Jan Sangharsh Yatra on January 20. Both the events will be a show of strength for BJP and Congress and the workers of both the parties are leaving no stone unturned for success of their respective programmes. It will be a unity show for both the parties in view of upcoming Lok Sabha elections.

Around 5,000 BJP workers from all over the country will participate in the rally. The convention of BJP’s SC Morcha will be held at Dr Vasantrao Deshpande hall. The premises will be named after Rajarshi Chhatrapati Shahu Maharaj Samta Parisar. The two-day convention is being held at Kasturchand Park. On the concluding day i.e January 20, BJP President Amit Shah will address the public rally.

On the other hand, the concluding function of Jan Sangharsh Yatra of Congress is taking place on January 20, too. On the occasion, City Congress, led by President Vikas Thakre, will felicitate Madhya Pradesh Chief Minister Kamal Nath, Rajasthan Chief Minister Ashok Gehlot and Chhattisgarh Chief Minister Bhupesh Baghel. The event will also be graced by MPCC President Ashok Chavan, Leader of Opposition in Lok Sabha Mallikarjun Kharge and Navjotsingh Sidhu.