The Nagpur MP said the prevailing situation has sent warning signals to the party and the leaders should bury the mutual differences. 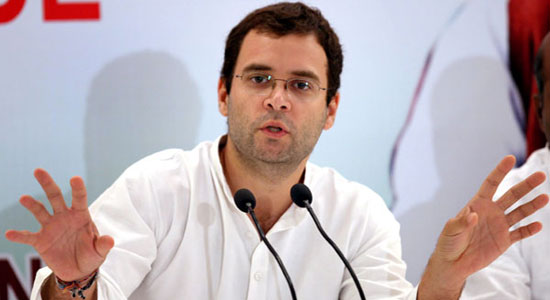 As the Congress high command officially declared Rahul Gandhi as its lead protagonist in the upcoming general elections, it consciously avoided naming him as the prime ministerial candidate. The Congress leaders in Nagpur including MP Vilas Muttemwar, Rajya Sabha MP Avinash Pande along with Congress AICC special invitee Anees Ahmed had also participated in the AICC meet in Delhi.

In his motivating speech Rahul Gandhi specially mentioned that the prime minister will be chosen by the MPs after the election. His words spoken in high spirits were unfortunately mired by the news of Sunanda Pushkar suicide that took away the prime time coverage of his speech from the TV tubes immediately after the shocking news surfaced. Still, the Congress ensured maximum clarity over general elections should pass out to the MPs and other workers attending the AICC meet in Delhi.

The announcement of Rahul Gandhi reining the Congress was unanimously welcomed by the leaders present. Out in the open all showered praise upon him and insisted him as the successor to PM Manmohan Singh in case the Congress is voted to power again.

Meanwhile, the city Congress leaders returned to Nagpur driving home the point that party’s refurbishment is the first priority. The prevailing situation has sent warning signals to the party that if they the leaders do not rise above the mutual differences and stand unitedly so save the party’s bastion, the repercussion is no far.

Nagpur MP Vilas Muttemwar defended the situation saying like any other party, infighting also exists in Congress and it’s high time the leaders should rise above the differences and pay heed to Rahul Gandhi’s fresh call for poll preparation with new strategy. “Now the leaders have understood that factionalism will only take the party in the decline mode. I must say that Congress men are realistic people, very responsive and sensitive. They will certainly come united as the appeal had come from Sonia Gandhi and Rahul Gandhi.”

Muttemwar added, “If Congress will be saved then only the leaders’ interests could survive. And Rahul Gandhi’s appeal has certainly infused new energy into the party.”

However, Senior Congress leader Anees Ahmed beg to differ. Ahmed voiced the concern of the grassroot level Congress workers who are disappointed for being sidelined. Mincing no words, Ahmed clearly stated the sorry situation in the aftermath of local body elections. “The key party leader blatantly ignored his own loyal workers who served for more than 5 years and instead got the tickets ensured to other party candidates in the local body elections held recently. This added to the resentment among the Congress workers,” Anees Ahmed told Nagpur Today.

He added there was a wave of dissatisfaction among the Congress workers and the general people. The business community is quite annoyed with local body tax which was forcibly imposed upon them. Even the gas subsidy linked to Aadhar is causing more harm than good as the people are forced to pay extra price from their pockets. “This has badly affected the poor who are the most frustrated lot with this new scheme”, he said.

“Even the local development has been put on backburner for past some years. In Nagpur the people are anguished with the party in the same way as they were in MP, Rajasthan and Delhi.”

Ahmed’s concern bear some substance as the subsidy being transferred to the bank accounts of the consumers fail to match the price of Rs 465, the official price of subsidized cylinder here. At present the consumer has to bear Rs 1365 from his pocket and later Rs 855 is deposited as subsidy. In any eventuality the customer is paying up more than Rs 500 from their pocket which is far more than the official price. But as Muttemwar said the leaders’ interest would remain intact till the party breathes in good health, the contention is spelled out in real terms. The party leaders have a long way to go before they stand winner at the people’s poll parameter.