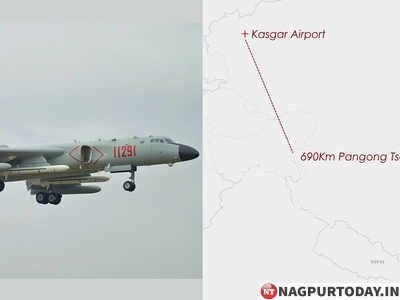 On the one hand, while Chinese leaders are claiming peace and stability with India along the Line of Actual Control, the People’s Liberation Army (PLA) is increasing its strength near the border. In the latest pictures, this trick of PLA is open. It can be seen that China’s PLA air force is stationed at Kashgar Airport along the border.

The satellite image of open intelligence source Detresfa has shown that strategic bombers and other assets are also deployed at the airbase. Looking at the distance from Ladakh here, it is feared that the deployment has been made due to tension from India. Satellite photos show that the base has 6 Shian H-6 bombers, two with 2 payloads. They are expected to be missiles. Apart from these, there are 12 Shian Jh-7 fighter bombers, two of which have payloads. At the same time, there are 4 Shenyang J11 / 16 fighter planes with a range of 3530 km.

These bombers are capable of carrying nuclear weapons. The distance of this base from Ladakh is about 600 km while the range of H-6 is 6000 km. The special thing is that China has also drilled in South China Sea along with H-6J and H-6G aircraft. Ships with which China has drilled amidst pre-existing tensions in the region can carry H-6J seven YJ-12 supersonic anti-ship cruise missiles, 6 of which may be under its wings. The drill was termed routine by the Ministry of Defense and said that it made a practice to be prepared during the time of war.