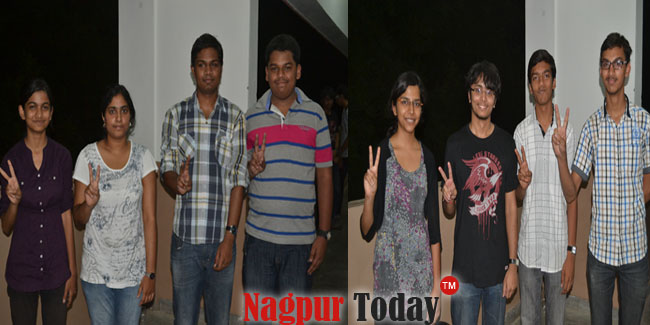 Nagpur News: Students across few coaching classes in Nagpur have fetched exceptionally well in the JEE-Mains, the first level for entering JEE Advanced i.e. for Indian Institute of Technology (IIT). This year the changed pattern has led the students to go for clearing two entry points before they finally land in IIT. Chandra Maloo, who has appeared in class-12th examination this year has topped in Nagpur with the score of 335 marks out of 360 in JEE-Mains. The results were declared by the Central Board of Secondary Education on Tuesday.

Sumit Gattewar, CEO, IIT HOME informed that Maloo has been pursuing his coaching classes with IIT HOME for two years. The institute has got to his credit the whopping 302 selections out of 450 students, he informed.

Among other institutes, Resonance is also expecting to get good number of qualified students, however the official figure was not available on account of the central analysis process in progress at Kota, where the institute is headquartered. Pallavi, Assistant Manager, Operations, Resonance Nagpur informed that though we are expecting about 400 selections from Nagpur centre, it would be too early to comment. She informed that analysis was still on.

Harish Fating of IIT Point informed that till the time of counting, 80 out of 250 students were found to have qualified for JEE-Advanced.

Future Vista, another prominent coaching class in Nagpur was also hoping to see good number of students hitting the second level. The institute has the total strength of 400 students. It’s East Nagpur centre has 56 students of which 16 managed to make the cut. More were yet to report.

Rests of the coaching classes were still busy in picking up the exact figures but sources revealed that most of the institutes are hiding the figures for their miniscule results.

A separate rank lists of JEE(Main) has also been declared  for admission to B.E./B.Tech. and B.Arch/ B.Planning (in institutions other than IITs) based on the score in JEE (Main) and normalized score of Class XII/Qualifying examination.

From the academic year 2013-14, admissions to undergraduate programmes at all IITs and ISM, Dhanbad, will be through the JEE (Advanced) examination, which will be conducted at various centers of the country including Nagpur on June 2.