The city roads are not safe anymore, whether it’s for ruthlessly driven vehicles or rushing street crimes. Of late the incidents of chain snatching have reached an all time high in Nagpur. The women and young girls are wary of flaunting their favorite neck jewels while stepping out.

During the past 10 months, maximum cases of chain snatching were reported at various police stations in the city. Mangalsutras and lockets worth staggering Rs 1,25,00,000 (Rs 1.25 crore) were taken away by the criminals speeding on the bikes.

The trend is not only worrying for crime charts but also caused concern to the safety of women on streets. The trauma post the incident is another serious issue to add to the woes. Going by the quantum of crime the number of arrests made in this connection is too miniscule which is enough to prove police failure in containing the crime.

Media fed up of reporting

More than 200 cases of chain snatching were reported during the past 10 months in different police stations of the city. Unreported cases could take the tally further. The criminals, riding on motorcycles, make maximum hits during marriage season, Ganesh festivity, Navratra, Dassehra, Diwali apart from other celebrations like birthday parties and other celebrations in the past 10-odd months. So intense is the frequency of crime that it becomes a routine event and often finds no interest in the media reports.

The chain-snatching incidents from January 2013 to November 21, 2013 stood tall with more than 200 women and young girls losing their much cherished treasure, purchased cheerfully, gifted by loved ones, and most happily offered by husbands. The Orange City is witnessing 18-20 chain-snatching incidents (reported to police) every month. The month of January saw 15 incidents, 18 in February, 13 in March, 15 in April, 31 in May (Highest), 18 in June, 16 in July, 18 in August, 28 in September, 18 in October, and 10 in November (till 21st). It means approximately 200 cases of chain-snatching were recorded in the past 10-odd months. The unreported incidents would tell a different tale.

The Nagpur Police, particularly the Crime Branch, clearly lacked in their efforts in curbing the street crimes in the city. Insiders say that some hardcore criminals have been involved in the crime which marked the sudden spurt in the chain-snatching cases during the recent months. Some youths with no crime record are also involved in this crime.

The criminals who rob women and girls of their “mangalsutras” and gold chains cannot fulfill their wishes by keeping the robbed jewelleries with them as they need hard currency. And for exchange of the gold with currency the criminals find any jewellery shop to dispose off the booty. And Sarafa Bazaar in Itwari is the favourite place for the criminals to sell-off the robbed booty. However, some jewellers themselves found in police net while purchasing the stolen jewellery from the criminals. This phenomenon forced the Sarafa Association go alert and now the jewellers demand Xerox of photo identity from suspicious sellers of jewellery, receipts of purchase, cheque payment instead of cash.

Since many youths having no crime record in police files indulge in chain-snatchings, police found themselves helpless in alerting the citizens, specifically the women and girls. However, police could put up posters of arrested criminals at every major square in the city which could alert the citizens and also deter the criminals from indulging in the crime. The police should also print their phone numbers on the posters, it will send a positive message among citizens and would also help citizens in informing police about any incident of chain-snatching immediately after the crime. 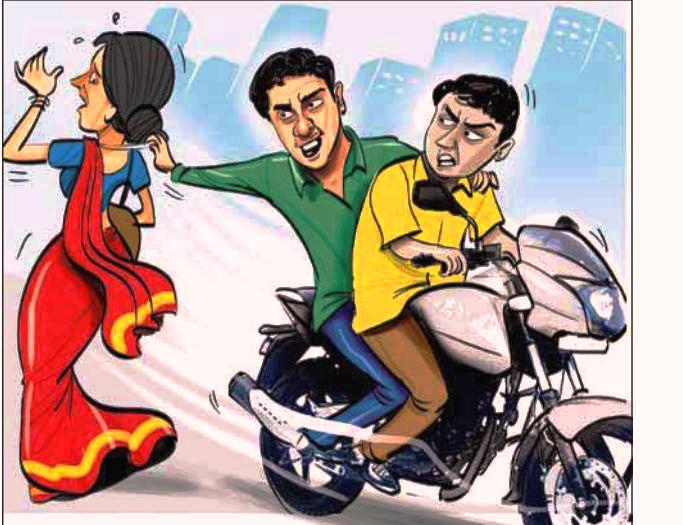