Nagpur News : Since Friday morning, chain snatchers went on a looting spree and made away with gold ornaments more than Rs 1 lakh from the victims.

Within 15 minutes, Ambazari police station received two complaints of chain snatchings. Around 8.30 am, Vimal Shirpurkar, 80, a resident of Gandhi Nagar, was walking to nearby shop when two youths on a speeding bike snatched away her gold chain worth Rs 40,000.

In few minutes, police received a call from Khamla resident Shyamna Raut who narrates the similar story that she was robbed by bike youths near Pandrabodi. Raut was walking with her son to school when the youths robbed her gold ornament worth Rs 35,000.

Half an hour later, 61-year-old Tara Shravane called police control room complaining that she has been robbed of her gold chain worth Rs 20,000 by bike borne thieves near Lakshmi Nagar. The senior citizen was driving her scooter to nearby temple when the thieves came from behind and snatched away her gold valuable. A case was registered at Rana Pratap Nagar police station.

Later, in the evening, an engineering student was robbed of her gold chain worth Rs 12,000 at Shatabdi Square in Ajni police station area. Neelima Itankar, 19, a resident of Narendra Nagar, had got a phone call on her way to home. While she stopped her two-wheeler to receive the call, three youths on bike pulled her ornament.

Last incident took place near Ladies Club Square in Civil Lines under the jurisdiction of Ambazari police station. However, the complaint was not filed till late night. 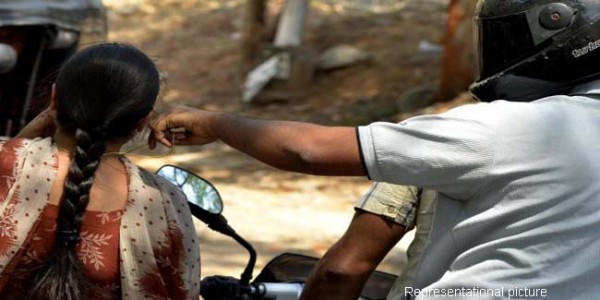