According to report published in TOI

A group of drunk youths attacked the TOI office in Nagpur on Sunday.

The youths were caught on CCTV damaging the main door of TOI. A case has been registered.

The fracas started at 2.45am outside the TOI’s Dharampeth office when some youths arrived in an Indica car and parked on the road just outside. Five youths, apparently drunk, mouthed obscenities against TOI and shouted slogans.

CCTV footage shows one of them climbing up the stairs to the TOI office before being called away by others. Security guard Dinesh Karale was standing outside the door that time. When the youths got back into the car and drove away, Karale left to alert guards at a neighbouring jewellery store. He said the youths returned after 10 minutes when he was still talking to other guards in the parking lot of the building. 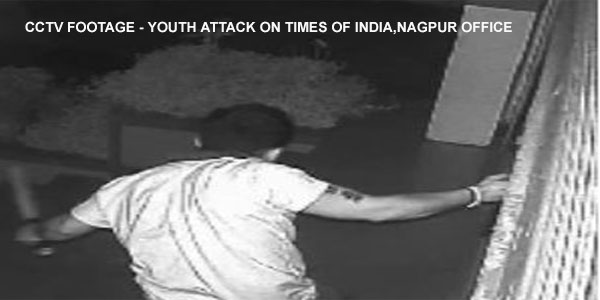