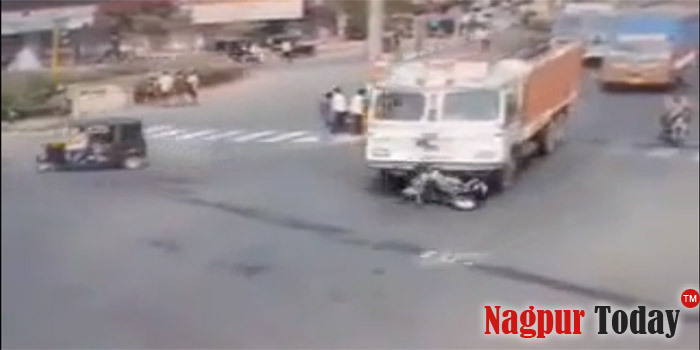 Nagpur News: Road accidents are quite a process in the mess of traffic chaos. Commuters risk their lives in hurry and often meet tragedy. Some sustain injuries while most of them succumb to it, when the clash is as ghastly as that of a truck and a scooter. But not this woman ( City not confirmed ) who risked her life dodging the truck at the turning on a bustling  square  but escaped unhurt. What can we call it but a miracle? The woman took the turn on her scooter overtaking a truck coming at a considerably high speed from behind.

A student caught the entire episode on his camera and whoever saw it would agree to this miracle. In the video grab, a woman riding a scooter is seen overrun by a truck and she came so near to death that her survival seemed impossible.  But destiny has something else in store for her.

She was fortunate enough to encounter the death and return to life. In such a rarest of the rare accidents the woman was knocked down by the truck and she was almost under the front tyre of the heavy vehicle but the scooter came in between throwing her off to safety.

Surprisingly, the woman tumbled and rolled just an inch beside the tyre and whooow… she stood up and ran after the truck. It was when people ran to stop the woman, she regained her composure. However, the sad part is that her scooter was badly smashed below the truck. But as the saying goes…JAAN HAI TO JAHAAN HAI…

BE CAREFUL ON ROADS. FOLLOW THE RULES, DRIVE SAFELY AND REACH HOME HAPPILY…