Nagpur News:  Six including Wadi Sarpanch and two kids escaped with minor injuries after the car in which they were travelling fell off from the flyover in a pond near Vidya Nagar T-point on Koradi Road on Sunday evening. The car fell off from around 15 feet height after a speeding truck hit them on the flyover while overtaking. Despite of falling in the pond having 5 feet water, all escaped with minor injuries. Passers-by rushed and rescued two children, Wadi Sarpanch Baby Dabhake, her son Dhananjay Dabhake, Gram Panchayat member Geeta Uikey and Ramesh Kokate.

Police said among six, only Kokate and Uikey were hospitalised for few hours at nearby private hospital while others were discharged after preliminary treatment. Police told that six people were travelling in the car to Koradi while the ten-wheeler truck was also heading in the same direction. As per the police information, since there were no reflectors on the bridge, the truck driver could not notice the car.

Accused driver first hit the divider and later hit the car while trying to overtake it. Due to the collision, the car fell off from the flyover. Since the car fell straight in the pond, there were no injuries. The truck driver has been booked by Koradi police. 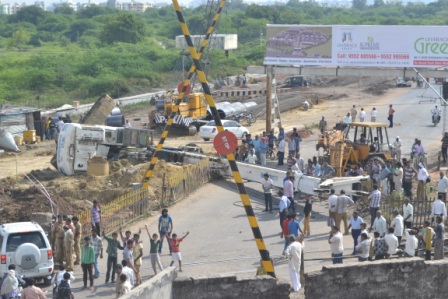