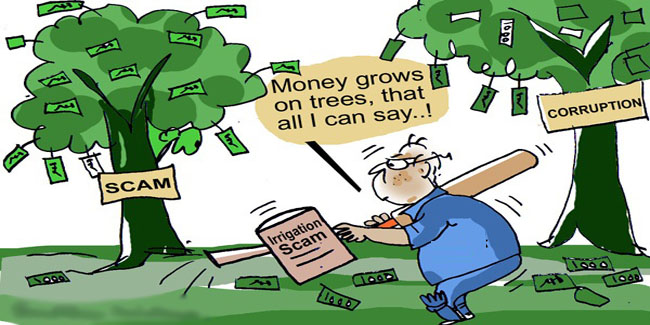 Nagpur News: Maharashtra’s largest irrigation project – Gosikhurd Irrigation Scheme in Bhandara district near Nagpur is limping to grind halt as most of the works have gone from bad to worse. Both the Left Bank Canal and Right Bank Canal of this project are lying in shambles. The Right Bank Canal has been constructed by Nagpur based contractor Ajay Sancheti, who is also a BJP MP. Deep cracks could be seen in these canals. An expert committee of engineers has told the government that the entire 23 km long stretch of Left Bank Canal is so shabbily constructed that it has to be rebuilt.

The project was launched in 1982 with the stated objective of providing water to 2.5 lakh hectare farm land.

But as of date less than 1 per cent of the targeted irrigation farm area has been covered by the project despite spending a whopping Rs.6,609 crore of public money against the original budget of Rs.372 crore.

Is it just a co-incidence that the people who got a majority of the tenders later went to become members of legislative council and of Parliament?

BJP is not the only party which has accommodated contractors in its fold. Two other big contractors from the region — Satish Chavan and Sandeep Bajoriya — are now with the NCP. Both are now members of Maharashtra Legislative Council, one nominated while the other was elected.

However, Bajoriya put a counter question in his defence, “Is it written anywhere in the Constitution that contractors cannot become MLAs and MPs?”

Until a few years ago Bajoriya’s father was a small time contractor. But as Bajoriya became active in politics, his firm grew in size. His firm entered into joint ventures and bagged tenders worth Rs.820 crore between 2007 and 2010. It is alleged that he got these contracts because of his proximity to Pawar.

But Bajoriya vehemently denies the charges of cronyism.

“My company is in this business for the last 40 years. My father looks after the business. I got contracts because of my qualification and not because of my closeness to Ajit Pawar,” he claimed.

Similarly, Satish Chavan who was a small time contractor in the 1990s saw an exponential rise in his fortunes coinciding with Pawar’s reign as irrigation minister between 1999 and 2009. During this period, Chavan bagged tenders worth several crore rupees. “I agree that I was a small contractor to begin with. But you will appreciate that with every new year the budgetary allocation for irrigation projects has also been increasing. If you compare with the total tenders bagged by contractors from outside the state, then you will realise that we have not got a disproportionate amount of tenders,” Chavan said.

In 2008, Chavan entered the Maharashtra Legislative Council on NCP ticket. This year he has been re-elected as an MLC.

Political connections and membership of assembly, it seems, grant immunity to charges of corruption and misappropriation of public money. With the lines between contractors and politicians getting blurred, the question is whether the irrigation scam can ever be independently investigated.