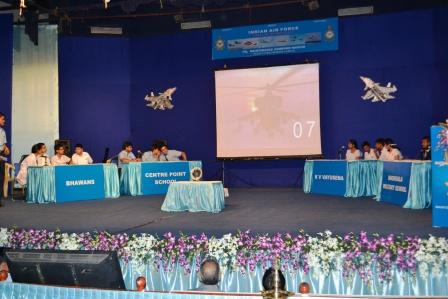 Nagpur News: The Indian Air Force (IAF) made an attempt to reach out to the school children of Nagpur city on the occasion of its 80th anniversary. A quiz competition was organised by the Force at Deshpande Hall on Thursday at 6:30 pm.

Teams of four students each from Centre Point School, Bhawans Bhagwandas Purohit Vidya Mandir, Kendriya Vidyalya and Bhonsala Military Academy participated. Centre Point School took a headstart in the first among eight rounds, winning fifteen points including a five- point carryover from a question that Bhawans failed to answer. All questions were based on facts about the IAF.

The evening began with presentations on the Air force and it’s Academy, urging the young generation to join the forces. Enthusiasm was high at Deshpande Hall, as each school had brought with it a large cheering squad. Air Marshal Jagdish Chandra opened the event. Principals of all participating schools were present.