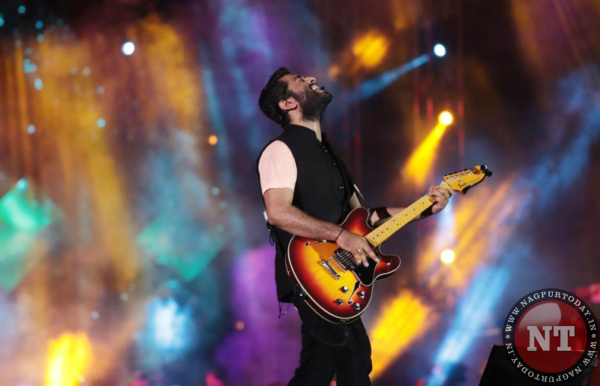 Audience felt the charm of Arijit’s live performance right from the word go. The suave singer got the audience hooked as he begun his performance with chartbuster song ‘Aye Dil hai Mushkil…. ‘ as he synchronized his music while playing the keyboard.

The singer was performing live at the launch ceremony of Jayanti Nagari 7 coming up on Besa road. Gadkari, who is known to be a hardcore politico showed up his affinity towards music as he turned out to be a die hard fan Arijit. “I am also excited for Arijit live in concert”, he said before the show.

Arijit made audience connected with back to back Bollywood chartbusters even. His rendition was well complimented by the weather too as it started raining while he was crooning to “Kabhi jo badal barse”.

The event venue was echoed with the chants of encore from the audience throughout the show.

The singer mesmerized one and all as he ended his show on a melodious note singing “Aacha chalta hu Duaao me yaad rakhna.”