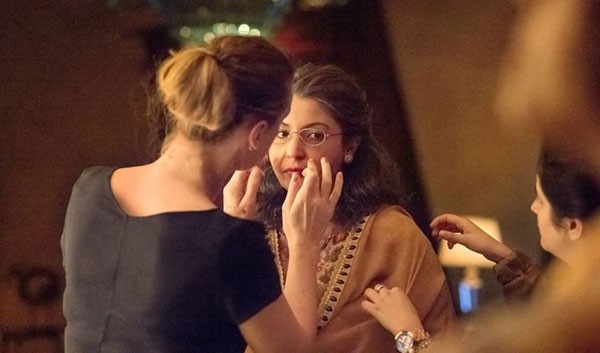 Looks like these days Anushka Sharma is trying different shades each day. While her spooky look in her last release ‘Pari’ scared us to the core, her new look is unbelievable. Yes! Anushka has recently clicked in yet another unrecognisable avatar where she has gone completely de-glam as an old lady.

A picture of Anushka is going viral on social media where the actress is dressed a brown salwar-kameez, as an old woman. In the picture, Anushka can be seen with pearl earrings and visibly grey hair in a half pony. The make-up artist is seen giving some final touches to her as she gears up for the shoot. Although it is still not clear as to why the actress has donned this avatar, the picture has indeed raised our curiosity.

Meanwhile, on the work front, Anushka is currently busy in shooting of her next ‘Sui Dhaaga- Made in India’ alongside Varun Dhawan. Besides this, Anushka is also shooting for Anand L Rai’s ‘Zero’ co-starring Shah Rukh Khan and Katrina Kaif. The movie is slated to release on December 21.

Could you guys even recognise her ? 😍😍😍 I mean ssly this look is so freaking amazing 😍😍😍❤ Can't wait to know what is it for it may be for Zero I think so but it's not confirmed.😍❤ . #virushka #Virushkaslays #viratkohli #anushkasharma #followforfollow #followforlikes #followforfollowback #lykforlyks