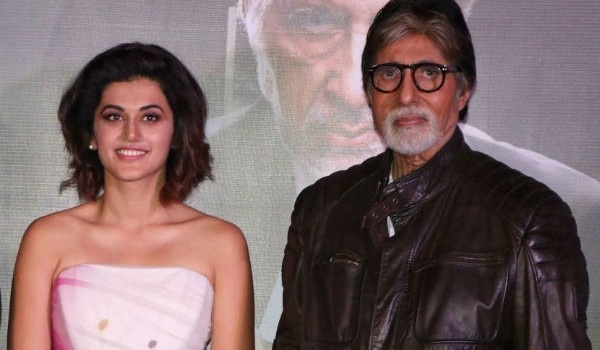 After making a power-packed combo in Aniruddha Roy Chowdhury’s Pink, Amitabh Bachchan and Taapsee Pannu are reportedly coming together for yet another project very soon. Rumours are rife that filmmaker Sujoy Ghosh wants to cast Amitabh and Taapsee for his next film, titled Badla. While Pink was a courtroom drama-cum-social thriller, Badla will apparently be a full-fledged crime-thriller. Reports suggest that while Taapsee has already signed on the dotted line, Mr Bachchan has liked the script but he is not officially on-board for the project yet. We are waiting for an official confirmation from the makers, and we hope it comes soon.

We know that Tapsee’s performance in Pink won her a lot of praises. Plus the fact that she got to work with a megastar like Amitabh was an icing on the cake for her. Taapsee had spoken about her experience of working with Bachchan in an interview. She had said, “It was an honour to work with him. Mr. Bachchan is an amazing and brilliant actor; everyone knows that. Yes, there was some pressure of performing well. I knew I have to be my best.” ALSO READ: Amitabh Bachchan feels ‘Film has lost charm’ after meeting Christopher Nolan
After doing a serious film like Pink, Taapsee went on to do a mainstream commercial film in the form of Judwaa 2 with Varun Dhawan and Jacueline Fernandez. With this she proved that she can pull off some diverse roles. Taapsee is currently shooting for Anurag Kashyap’s upcoming film, Manmarziyan.

Meanwhile, Amitabh will star in 102 Not Out in which he plays Rishi Kapoor’s father. The trailer of the film was dropped a few days ago and it impressed many. Apart from that, he has Yash Raj Films’ upcoming venture, Thugs Of Hindostan, which also stars Aamir Khan, Katrina Kaif and Fatima Sana Sheikh. And not to forget, Ayan Mukerji’s Brahmastra with Ranbir Kapoor, Alia Bhatt and Mouni Roy.