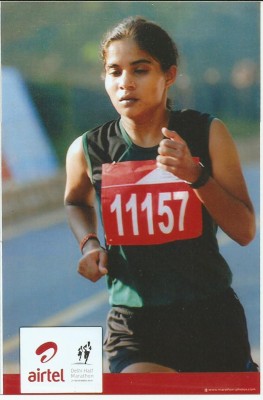 Nagpur News: The ace marathon runner of Nagpur, Rohini Raut, again made the city proud by winning the Gold Medal in the All India Inter-University Athletics Competition being held in Patiala in Punjab.

The student of Dhanwate National College and representing Rashtrasant Tukdoji Maharaj Nagpur University (RTMNU), Rohini Raut won the 21 km Girls Marathon Race with the timing of 1 hour 19 minutes (1:19 hour) and made the Gold Medal in her name in the 74th All India Inter-University Athletics Championship hosted by the Punjab University.

The outstanding runner Rohini Raut had excelled and brought laurels to the Orange City by winning several contests in the past also. In the recently held Airtel International Marathon Race in Delhi, Rohini stood 8th in the Indian participants. Similarly, in the Inter-Collegiate Cross Country Competition, Rohini Raut created a record by winning the race consecutively for six times.

In 2013, Rohini Raut’s twin sister Monica, had won the Gold Medal in the 73rd All India Inter-University Athletics Competition held in Kolkata and hosted by Kalyani University by winning the 21 km Girls Marathon Race with the timing of 1 hour 20 minutes (1:20 hour).