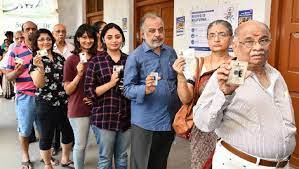 Amid a chaotic situation across West Bengal during the second phase of the state Assembly polls, the voter turnout here reached 60.97 per cent till 3:10 pm on Thursday.

Bankura registered the highest voter turnout among all districts with 64.73 per cent, while Prathampratima beat other constituencies to register a voter turnout of 75.15 per cent. Voting for the second phase of the West Bengal Assembly election began at 7 am on Thursday.

A chaotic situation unraveled in the state as all major political parties blamed each other for booth capturing, while sporadic incidents of violence were reported in several constituencies, especially Nandigram.

Chief Minister Mamata Banerjee’s visit to Nandigram during her high-stakes battle against her former ministerial colleague Suvendu Adhikari created an intense scene and hundreds of people gathered there and sloganeered loudly.

Meanwhile, a media vehicle was vandalised in Nandigram by unidentified miscreants, for which Adhikari blamed Pakistanis.

In phase-II, a total of 30 Assembly constituencies from the districts of South 24 Parganas, Bankura, Paschim Medinipur and Purba Medinipur are heading in to vote.