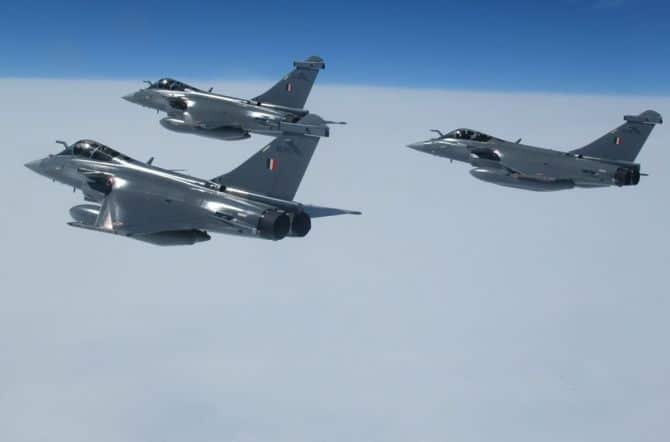 A seventh batch of three more Rafale fighter jets arrived in India after flying non-stop for a distance of almost 8,000 km from France, in a further boost to the strike capability of the Indian Air Force.

The aircraft were provided mid-air refuelling by the air force of the United Arab Emirates.

“Three Rafale aircraft arrived in India a short while ago, after a direct ferry from #IstresAirBase, France. IAF deeply appreciates the support by UAE Air Force for in-flight refuelling during the non-stop ferry,” the IAF said in a tweet.

Following the arrival of the new batch, the number of Rafale jets with the IAF went up to 24.

The new squadron of Rafale jets will be based in Hasimara airbase in West Bengal.

The first Rafale squadron is based in the Ambala air force station. A squadron comprises around 18 aircraft.

India had signed an inter-governmental agreement with France in September 2016 for the procurement of 36 Rafale fighter jets at a cost of around Rs 58,000 crore.

India is expected to get more Rafale jets from France in the next few months.

The Rafale jets, manufactured by French aerospace major Dassault Aviation, are India’s first major acquisition of fighter planes in 23 years after the Sukhoi jets were imported from Russia.

The Rafale jets are capable of carrying a range of potent weapons. European missile maker MBDA’s Meteor beyond visual range air-to-air missile, Scalp cruise missile and MICA weapons system will be the mainstay of the weapons package of the Rafale jets.