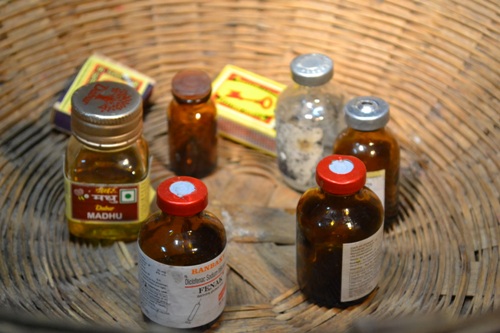 10 people were arrested for selling Venom of Cobra. 5 out of the nabbed were Sarpamitras. According to our reports these 10 people would catch the cobra, take out the venom and then would go to the market and illegally sell this Venom to the people. Out of these 10 people 5 people are snake catchers who first catch them and then take out their poisonous venom and finally they give it to the remaining 5 who then go out in the market in search of worthy buyers. the police got an intimation that these 10 were searching for some buyers and that’s when they through a trap and posed as buyers. the police recovered 8 ml Bottles of Venom which in Indian market is valued at around 6 to 7 lakhs. Forest Police have arrested the accused and have sent them to jail.They will be produced in court tomorrow. Apart from the venom, Six King Cobras, One Grass Snake and 1 Chameleon were rescued from the accused. As per the law, the accused will get 6 years RI. Despite repeated questioning, the officials did not reveal the names of those caught, saying ‘secrecy was of utmost importance’. Tough the accused were supposed to bring snake venom worth Rs. 3.5 Crore to the international market, they brought only 10mm of venom valued at Rs. 7 Lakh. 6 Motorcycles and 14 mobile phones were also recovered from the accused.
The Forest Department have booked the accused under section 9, 49 B, 52 and 57 of the Indian Forest Act 1927 and have been arrested. this particular incident is a very serious matter as some times these venom are used in Rave parties also.
APCCF ( Additional Principal Chief Conservators of Forests) Anil Saxena said that these venom are used for anti-venom drugs and also for creating drugs but we are looking into this matter to rule out all the possibility that comes are way and also added the these people who are addicted to drugs normally mix this venom in water and fulfill their addiction for drugs and this particular business has to be stopped
%%wppa%% %%slide=20%%
Advertisement