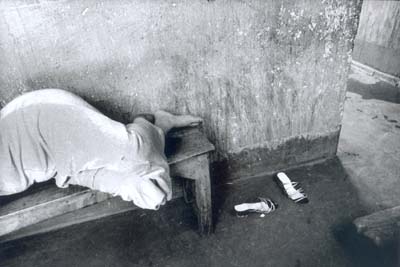 It seems that Lakadganj police have ignored a woman’s death during their raid at city’s red-light area of Ganga Jamuna on Thursday evening. A 20-year-old Manisha Dhanawat died while the cops were chasing the people during raid.

Manishas relatives told that during the raid, while everybody was trying to escape from being nabbed, she fell down and other ran over her.  In the chaos, she was left lying with blood coming from her mouth.

The victim, who has a three-year-old son, was standing in front of her house in the red-light area. Sources said that it was a regular job of Lakadganj police to conduct a check in the area. As others got panicked and were running helter-skelter, Manisha too got worried and started running. However, during the chase, she fell and many ran over her causing her death.

The relatives claimed that though Manisha died, Lakadganj police have no idea about the death. No case of an accidental death was registered nor was the post-mortem conducted. Her body was taken to her native place Agra by her family.

Manisha was rushed to nearby private hospital where she died few minutes after treatment. The kin alleged that Manisha died in the stampede during the cop’s raid. However, cops ignored the incident.