Yet another case of defaulting on payment of whopping Rs 3 crore by Wasankar Wealth Management has come to light. Wasankar has reportedly threatened an investor who parked his moolah into the company’s dubious scheme promising him of 24-27% of high yearly returns. Wasankar applied the pressure tactics after the cheques issued to the said investor bounced for lack of funds.

The said investor who resides in Laxmi Nagar had invested the amount of Rs 3 crore he secured from his business and bank loans. He had taken the loan for some business purpose which did not work out and eventually put his money into Wasankar’s scheme in July 2013.

When the cracks started appearing into the scheme and the investors panic grew, this investor approached Wasankar and informed him about his concerns. He told Nagpur Today that when he asked for his money back, he was misguided by the company which gave him few cheques which did not carry the stamp and name of the signatory. Even the promissory note was not issued to him. “Only after I repeatedly insisted on the required documentary assurance, Wasankar gave us the revised cheques bearing the stamp and name, along with promissory note,” he informed.

The investor then deposited the cheques as per its due date in September this year, but the cheques bounced due to insufficient funds. He contacted Wasankar and asked for his invested sum back if the latter could not give any interest.

This investor further told Nagpur Today that on September 28, 2013 when he went to Wasankar’s office, he was warned that his money would not be returned if he further makes issue out of it. Wasankar also bought 4 days to return the money but later refused to talk or meet in this regard.

The investor is wary of lodging the police complaint in this regard as he feared that he could lose his money in the process.

Wasankar requested investor not to reveal anything in media

Meanwhile, it is learnt that Wasankar turned extra cautious after the media approached this investor. “Then Wasankar approached me and requested not to speak out anything before media,” the investor informed adding that he only reverted with the demand that Wasankar should return his money.

Wasankar then assured of paying Rs 52 lakh on the spot while the rest to be paid in instalments through post dated cheques for the months of January, February and March next year. After Wasankar paid Rs 52 lakh, Rs 2.75 crores were left to be paid. Succumbing to the pressure from the said investor, Wasankar gave away post dated cheques of the instalment along with a promissory note.

This week, the investor approached Wasankar again to ask for money as he required to pay off against some immediate purchase of property. But Wasankar not only refused to meet him but also not paid anything. However Wasankar came with this piece of advice to the investor to refrain from going to media against him. 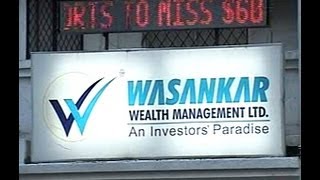