Nagpur News: When relevant provision of Income Tax Act, 1961 was introduced, wherein Employer or whoever pays you, deducts TDS (Tax Deducted at Source) and even gives you a TDS certificate, there was enormous dilemma whether such employer pays/deposits such TDS amount to the Government or not.

However during such transitional period few financial years were so wherein, the facility of 26AS does not helps the assessees and of such financial years when Income tax assessees after filing Income Tax returns, receives intimations u/s 143(1), in general are required to pay huge demands which are created because of mismatch of TDS as claimed in the Income Tax return. 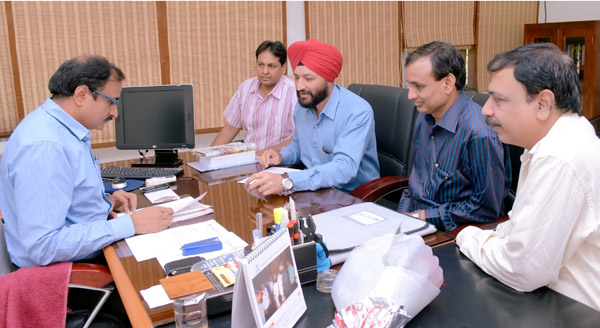 Taking this issue on preference, delegation of Vidarbha Taxpayers Association (VTA) led by its Vice President Shrawankumar Malu met Commissioner of Income Tax (TDS) Satish Goyal and discussed the issue in length and also handed over memorandum on the subject.

Shrawankumar Malu said whenever any Department/Govt Office/Bank deducts TDS on behalf of the assessee, it is mandatory for them to file quarterly statement of TDS deducted, along with PAN of deductee and other details, however if erroneously there is slightest of mismatch in reporting the particulars of deductee, the TDS deducted by the Department will not reflect in the Form 26AS and as such, no credit of TDS will be allowed to the assessee, resulting in unnecessary and unjustified demands and hassles of getting the rectifications done, for which he is no way concerned.

Malu said to get the rectification done, at first the assessee has to request the concerned department to file a revised statement with correct particulars of deductee and only after revised statement is filed, the same will start reflecting in the 26AS and thereafter, the rectification is possible, thus this process is extremely lengthy and tedious. Unfortunately in many cases the concerned department refuses to revise the statement. As a result the assessee is brought to such worrisome task for no fault of his.

Tejinder Singh Renu, secretary of VTA said Delhi High Court has already considered such positions in Public Interest Petition No. 2659/2012 – Court on its own Motion Versus Commissioner of Income Tax and has passed its Order dated 14.03.2013, wherein Hon’ble Judges have formulated guidelines of procedure to be adopted by income tax department, hence request department to follow such Guidelines.

Renu said from very provision of TDS, one thing is sure that Finance Ministry as well as Income Tax Department does not TRUST its Assessee, hence such provision of TDS has been enacted. Request finance ministry and income tax department to have faith in taxpayers and make only such provisions, which target only the guilty. He said, disallowance of TDS credit due to mismatch and later deduction of demand from next year’s refund causes double tax payment on assessee’s end and double collection by department, which is absolutely unjustified and unconstitutional as well.

After giving patience hearing to the VTA delegation, TDS Commissioner Satish Goyal said that he agrees to this position being faced by assesses in returns of few past assessments year. He said many strict provisions has been introduced after enactment of new Finance Act from 1.7.2012, wherein Sections like 271H and 234E brings more accountability on TDS deductor. He said now department is also seeking prosecution on major TDS defaulters. His advice to taxpayers is to be more vigilant and computer savvy to avoid last moment rush, likewise avoiding punishment and penalties.