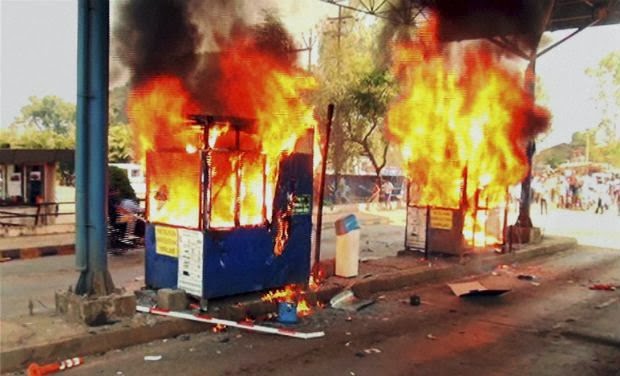 Nagpur News : Vidarbha Janandolan Samiti activist group  has come out openly to support  Shivsena and all party action committee stir against   rampant corruption and massive exploitation at all Toll-Plazas throughout Kolhapur  and demanded the urged to scrap all BOT agreements allowing such Toll collection centers  where roads  are even completed and damaged and ten time cost of the project is recovered being operated  in to alleged nexus in  political leaders, babus and contractors even judiciary is being used to legitimize this illegal Toll Gate scam by giving misleading information’s  before all toll booths are set on fire like Kolhapur metro   , Kishore Tiwari  President VJAS informed in press release today.
In vidarbha which is backward region of Maharashtra hundreds of BOT roads needlessly constructed with giving exaggerated cost escalations in some cases 10-20 times from real cost of construction ,some of four lane roads have been replaced by good working condition two lane road even when there was no vehicular traffic on the route ,most of BOT operator in vidarbha is business partner of political party in power or main opposition party and this fact is known to all section of civil society and media  till crop of Toll Plaza is mushrooming day by day even after there is strong protest from local residents but powerful mafias are just suppressing the unrest  with muscle power and political-administrative protection and revolt like Kolhapur is only solution for illumination of Toll-Raj in vidarbha, Tiwari added.
‘Vidarbha there is massive backlog of road and under constitutional provision of section 371,Govt. should pay the real cost of project and scarp all agreement  of going or existing BOT road project   other wise Toll-Plaza will give humiliating defeat like Delhi to Maharashtra Govt.’. Tiwari warned .
“Govt. should look in to facts of the study report 2013 done by the Transport Corporation of India and IIM Calcutta that Slow truck speeds on highways and delays at toll plazas are costing the country about Rs.60,000 crore a year, but recent facts are more shocking that more than Rs.60,000 crore  by the BOT operators by way collecting unjustified and unlawful levy  from innocent transporters lastly poor common man has to pay it   hence whole issue on going TOLLGATE scam is national issue not limited to Maharashtra and now time has come to brake  this unholy cartel of top political leaders to stop this flood of tolls and people will have liberty to move freely in this so called liberated democratic India” Tiwari added.
The unholy cartel of Babus-political leaders-contractors and blind eye of media and judicial system as open as sunlight can be seen on NAGPUR-CHANDRAPUR, NAGPUR –AMARAVATI AND NAGPUR –HYDRABAD highways and we are ready provide more concrete documentations of stage managed contracts and exaggerated estimate and then over valued toll-tax collection hence we demand the complete judicial probe over ‘TOLL-GATE’ scam which is much higher than ‘COAL-GATE’ scam, Tiwari added.
‘Last anti-corruption crusader Anna Hazare demanded  closer of all Tolls and threaten stir and surprisingly PWD Minister of Maharashtra  closed more than 27 MSSRDC tolls to pacify  Annaji but after three month all tolls were reopened ,it shows that tolls are being opened and run as per wish and will of minister and unholy nexus between political parties are allowing the misdeed to continue that much more humiliating hence we are supporting stir and will take this issue to all legal forum of redressal ’ Tiwari said .
“The process of multiple tax collection and allowing the BOT Bazar  in this country is matter of serious implications to fundamentals rights of innocent masses and open support of main opposition  parties is matter of shame as people who are fighting against corruption and promoting scams which is unfortunate but people of this country will punish all these TOLL-GATE scammers” Tiwari added.