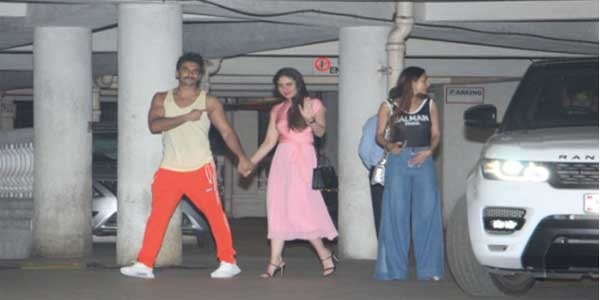 Ranveer Singh, who had confessed to being a major fan of Kareena Kapoor, bumped into the actress at Ritesh Sidhwani’s house party on Friday. Kareena, who is basking in the glory of the success of Veere Di Wedding, let her hair down at the party and in one of the videos from the party (as uploaded by Zoya Akhtar on her Instagram story), Kareena can be seen singing I Just Died In Your Arms Tonight by Cutting Crew with Amrita and Malaika Arora. The video ends with Kareena exclaiming: “I could have been in Gully Boy!” Gully Boy is being directed by Zoya Akhtar and stars Alia Bhatt opposite Ranveer, who plays the role of a rapper in the movie.

Via Zoya Akhtar’s InstaStory :
Kareena Kapoor : I could’ve been in GullyBoy 😂😂😂 pic.twitter.com/AeDMmqqLbI

Ranveer Singh is essaying the role of a street rapper in Zoya’s Gully Boy, which also stars Alia Bhatt.