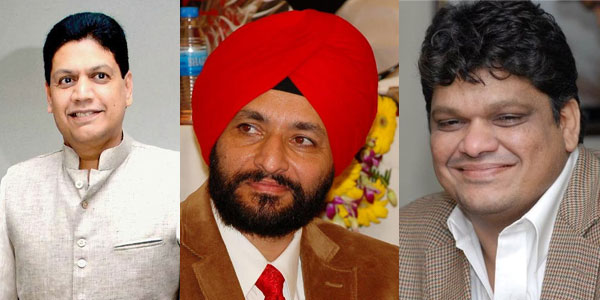 The traders across Vidarbha, particularly that of Nagpur had cruised through troubled waters for most part of this year. The trade organizations in the city had to weather the storm round the year traversing through too many ups and downs. As such nothing new happened on the business front that could take the flight forward in 2013. On the contrary, the imposition of local body tax (LBT) left the traders in turmoil. The traders took to the streets and waged an open war against LBT. The traders organized the longest every bandh in the city which was extended for good over a month but the traders ultimately lost the battle at the hands of the state government. The war is still on. However the traders’ outcry over levying LBT in place of octroi has certainly hit the business badly. There was no development on the industrial front either. Except BHEL project in Bhandara, no new project came up in the entire Vidarbha. Mihan remained a distant dream. Tata Consultancy Services (TCS) though awaken little hope but it all dampened as the year approached end.

Nagpur Today quizzed the representatives of prominent trade organizations in the city to know the overall business scene in the year 2013.

Dipen Agrawal, President of Nag Vidarbha Chamber of Commerce (NVCC) lamented over the dead slow development in the city. He said, “The trade and traders were worst affected with the few anti-business decisions. Rather the corruption on the part of bureaucracy hampered the progress big time. No action was taken against such corrupt officials. The Chief Minister Prithiviraj Chavan acted like a student who writes nothing in the exam thinking that if he does not do anything there will be no allegation on him. This was his attitude towards the traders. No decision was taken at the right time.”

Agrawal added that local body tax (LBT) marred the trade and revenue prospects like nothing. “Even today the traders are still awaiting their VAT returns which become a major hurdle in taxation. Instead the traders were heaped with multiple taxes,” he said adding that in 2014 these anomalies should be duly removed to establish a healthy business regime. Talking about Vidarbha, Agrawal said that when Telangana was announced this year, Vidarbha ought to be included in the separate statehood but it could not take shape due to vested political interests. “Smaller states deliver sound governance – This fact was blatantly ignored while considering the case of according statehood to Vidarbha. We hope Vidarbha would be created a state and its backlog removed in 2014”, he said.

Tejinder Singh Renu, Secretary, Vidarbha Taxpayers Association (VTA) said the picture on the business horizon in the city was certainly not what was anticipated from 2013. “We expected the growth of Nagpur in a particular fashion but it was not satisfactory. Mihan now becomes a far-fetched dream and the day it will come, it will stand ineffective for sure. The boom had clearly diminished on Wardha road contrary to what was seen some years back when Mihan was announced. This year very few townships came on Wardha road,” he said.

Renu said, “I am in Jaipur right now and I found the road from Delhi to Jaipur the testimony of the development here. It’s unbelievable. Even in Marathwada region you will find similar development but not in Vidarbha. We certainly failed to utilize the potential of our region. The problem lies in the fact that there are too many hurdles in the form of unwanted rules and regulations. Here you will find too much of law enforcement. And too much of anything is just not good for the health of any region. Look when you talk about development then you need to have the positive bent of mind to let the development sail through. You have to be pro-development.”

He hoped that 2014 will usher in some good with the upcoming elections and the political parties would response adequately to the wake-up call in the aftermath of historical win of Aam Aadmi Party in New Delhi.

No economic growth without separate Vidarbha

Devendra Parekh, President of Vidarbha Economic Development (VED) also voiced similar sentiments when asked about the scenario in 2013. He said it was the dull year altogether. “No new industry in the region meant no fresh demand in residential spaces, education sector and other consumables. This had severely affected region’s economy. Barring BHEL project in Bhandara, the industrial development in Vidarbha remained standstill throughout the year. We hope the 2014 general elections give us stable government which could work for favorable mining policies in the region. There were so many private players in the power sector that appeared last year. Ironically, most of them had to stop their works for the lack of coal supply. The mining policies are so stiff that it has started taking toll on power sector leading to the closure of private units. This adversely affected the employment rate in the region. Vidarbha had been the discarded lot always as the smart representatives from western Maharashtra had always played with the innocence of Vidarbha people and snatched away its fair share of development.”

Parekh said this year though Tata Consultancy Services had incited some hope of generating demand by announcing that its BPO unit in Mihan would be operational by December end but it also could not take off for the excessive rains this year. TCS was scheduled to create 2000 jobs followed by another 2000 seats to be filled in March 2014. Now the entire process of recruiting 4000 candidates has been slated to March. We hope this should happen in 2014 as Vidarbha only earns Rs 6 crore from BPO whereas Bangalore and Pune contributes Rs 8000 crore and Rs 2000 crore through BPO sector in their region’s economy. This depicts the sorry state of Vidarbha, he added.

He rested hopes on BJP’s prime ministerial candidate Narendra Modi who could attend to the Vidarbha issues as Congress government had failed to do so. “We hope that Modi could form stable government at the Centre in upcoming Lok Sabha elections and adhere to the demand of separate Vidarbha. Unless separate Vidarbha is formed there are no chances of development in Nagpur or anywhere in the region. Secondly, we wish to see stable government at the Centre in 2014,” he quipped.