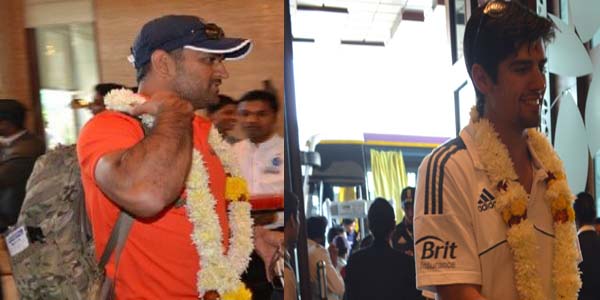 The entire Indian test team checked in at Radisson Blu, Nagpur today morning in hope of saving the series as they look focused towards their goal. This series  and in particular the Indian team has had its own share of up and downs right from winning the first test to loosing the remaining 2 and definitely face an uphill task to salvage pride as they go into the final test that begins on Thursday.

The Indian teams were welcomed with Garlands and Tika as they made their way to their respective rooms.

On the contrary the England team was in a spirited mood as they also made their way inside the hotel. The team was animated and excited to come here know that they have nothing to lose but everything to play for as the stand at the threshold of a famous series win.  Alastir Cook was all smiles as he made his way through . England skipper Alastair Cook is enjoying a brilliant run in the ongoing Test series against India with three centuries from as many matches and the 27-year-old is keen to let his bat do the talking one more time in the fourth Test at Nagpur.
“I have had a really good tour so far but another challenge really is quickly round the corner. Hopefully, I can do it one more time,” Cook said

The left-handed opener, along with rest of the England top and middle order, has worked on extended batting sessions to perform well in the sub-continent and the approach has reaped them rich dividends.
“We spoke about batting for long periods of time as the norm here is to accumulate runs and bat the whole day. Not many can come and dominate the bowling here but we have been successful but we need to keep doing it.”
Cook also praised the performance of his bowlers in winning the Kolkata Test which has given them a 2-1 lead going into the final match of the series. It’s the showdown at Nagpur and the entire city is looking forward to see who takes the cake and who is left looking.