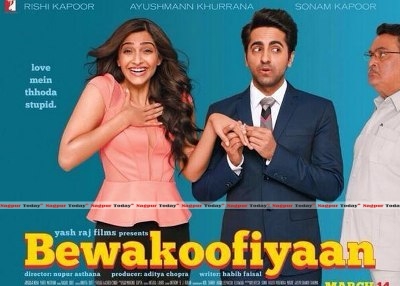 Bollywood style diva Sonam Kapoor is literally occupied these days, not in going for the film shoot or attending series of award functions but for her brother’s marriage. A couple of days back, Sonam posted a picture of her at the wedding preparation of her brother on Instagram. Now Sonam is quite amused with her upcoming venture from Yashraj Films.

Sonam has posted another image on her Facebook page, this time the picture belongs to her upcoming movie called Bewakoofiyaan in which Sonam has been paired opposite Ayushmann Khurrana, Sonam Kapoor and Rishi Kapoor. It’s directed by Nupur Asthana and produced by Aditya Chopra under the banner of Yash Raj Films.

The first look of the movie is out and Sonam and Ayushmann are reported to be playing urban lovebirds with Rishi Kapoor playing Sonam’s stern father.