Nagpur: At a time when the mysterious death of Justice BH Loya hearing the Sohrabuddin encounter case involving BJP President Amit Shah, has become the talking point nationwide, yet another shocking fact has come to the light.
In a sensational revelation, leading media house National Herald has claimed that Amit Shah, a CBI lawyer and the present HC judge hearing revision petitions in Sohrabuddin case all stayed at Ravi Bhawan, Nagpur in March 2015, 3 months after Judge BH Loya died.

The media group has claimed to have learnt that three-and-a-half months after the mysterious death of CBI Judge BH Loya, a curious mix of guests all happened to stay at Ravi Bhawan in Nagpur at the same time. Ravi Bhawan is the same state guest house where Judge Loya was reportedly staying when he felt unwell and was taken to hospital, where he was declared dead on December 1, 2014.Judge Loya, at the time of his death, was hearing the Sohrabuddin Sheikh alleged fake encounter case, in which BJP President Amit Shah was an accused.

Two-and-a-half months after he was discharged from this case by Loya’s successor, Amit Shah also came to stay at Ravi Bhawan.The Ravi Bhawan guest register for March 2015, accessed by National Herald, shows that Amit Shah stayed there at the same time as Additional Solicitor General Anil C Singh—presently representing the CBI in the trial court in Mumbai in the Sohrabuddin Sheikh fake encounter case. Also staying there at the same time was Justice NW Sambre—presently hearing petitions in the Bombay High Court against discharge of several IPS officers accused in the Sohrabuddin case.Page number 155 of the Ravi Bhawan register shows, under entry number 925, that cottage numbers 3 and 7 were booked for Amit Shah. The next entry 926 shows that cottage number 8 was booked for Anil Singh. Entry number 926 A (a handwritten insertion) was booked in name of Supreme Court Judge UU Lalit. And entry number 927 shows cottage number 9 was booked in the name of Judge NW Sambre. An image of page 155 can be seen below: 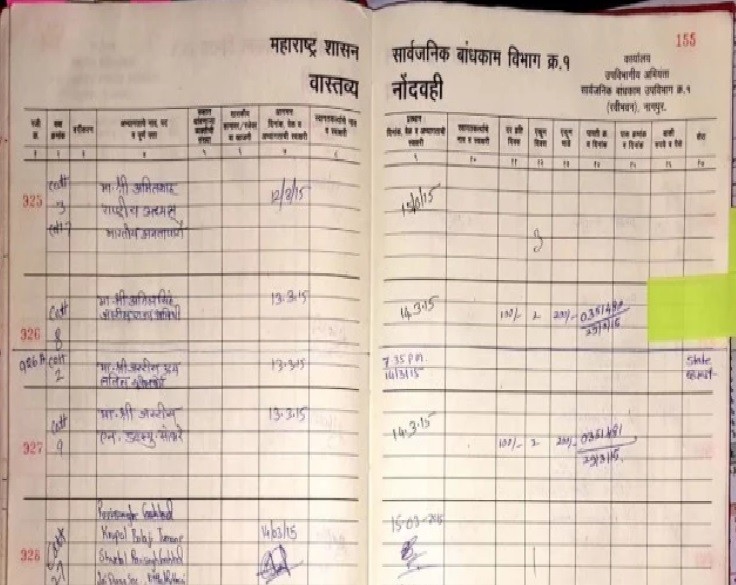 In a coincidence, Amit Shah became National President of BJP and Anil Singh was appointed ASG of India (Western Zone) by the Central Government, on the same day—July 9, 2014. Besides serving as BJP President, Amit Shah does not hold any formal position in any government, central or state.Many lawyers, judges, politicians, journalists visiting Nagpur stay at Ravi Bhawan, as it is centrally located right opposite the High Court at Nagpur. Nonetheless, was it again just a coincidence that a recently discharged and powerful accused, the lawyer presently representing the opposite side in the same case and the judge who would later come to hear revision petitions on discharge of accused in the same case, all stayed together at the same guest house at the same time?

National Herald has accessed the register of Ravi Bhawan Guest House in Nagpur, which shows two cottages 3 and 7 were booked in your name and that you arrived on March 12, 2015 and checked out on March 15, 2015.

Can you please confirm your visit on these dates? In which of the two cottages did you stay in?

Were you aware that ASG Anil Singh, presently representing CBI in Sohrabuddin Sheikh alleged fake encounter case—in which you had been discharged in December 2014—and Judge NW Sambre, who is presently hearing revision petitions against discharge of some accused in the Sohrabuddin alleged fake encounter case matter in Bombay High Court, were also visiting Nagpur and staying at Ravi Bhawan guest house on March 13, 2015?

Did you meet with Judge Sambre in Nagpur during your stay there? If yes, where and in what capacity did you meet the judge?

Did you meet with ASG Anil Singh, presently representing CBI in the aforesaid case, in Nagpur during your stay there? If yes, where and in what capacity did you meet the ASG?

NH Questions to Anil C Singh National Herald has not been able to confirm when Anil Singh began appearing for the CBI in the Sohrabuddin case. Was it as soon as he took over in July 2014, or later? To find out, we contacted ASG Anil Singh on his cellphone at 4.53 pm on April 4, 2018. This correspondent introduced himself and asked Anil Singh to confirm if it was he himself on the phone.

Anil Singh confirmed his identity. Our correspondent then told Singh that he had visited Nagpur to do a follow up story on the Judge Loya case and that he had some queries about the case. Continuing, he said he had visited Ravi Bhawan and seen the guest register. At that point, Singh said he was not able to hear our correspondent’s voice clearly and that he would call back. He then cut the call. He did not call back.We then emailed similar queries to ASG Anil Singh as we sent to Amit Shah. In addition, we asked Anil Singh from what date he began appearing for the CBI in the trial court in the Sohrabuddin case. We did not receive any reply from either by the time of publishing. We will publish their versions/answers if and when we receive these.

A sudden transfer in the Bombay High Court on revision petitions in Sohrabuddin caseIn February, 2018, Justice Revati Mohite-Dere of the Bombay High Court was three months into hearing the revision petitions filed by the CBI and Rubabuddin Sheikh against the discharges of senior police officers in the Sohrabuddin case. As observed by Justice Mohite-Dere, the CBI opposed the discharge of junior policemen accused in the case, while not opposing discharge of senior IPS officers.

Just as CBI had decided not to oppose Amit Shah’s discharge. Not only did CBI not challenge Amit Shah’s discharge, it’s lawyer Anil Singh told the Bombay High Court on January 23, 2018 that the CBI would oppose a Public Interest Litigation filed by the Bombay Lawyer’s Association against CBI’s decision not to challenge Amit Shah’s discharge.Justice Mohite-Dere had notably lifted a gag order imposed by the trial court in November 2017, thus allowing the media to report on the Sohrabuddin case. She had also reprimanded the CBI for its unpreparedness to conduct the prosecution. “I am not getting the kind of assistance that I should have been getting from the CBI.

If this is your attitude, then why are you even conducting the trial?” Mohite-Dere had said to CBI during a hearing.On February 26, 2018, hearings on all revision petitions were transferred within the Bombay High Court from Justice Mohite-Dere’s bench to the court of Justice NW Sambre. Justice Revati Mohite-Dere was put in her place by the political class, claimed a Nagpur-based criminal lawyer.

Was it again just a coincidence that a recently discharged and powerful accused, the lawyer presently representing the opposite side in the same case and the judge who would later come to hear revision petitions on discharge of accused in the same case, all stayed together at the same guest house at the same time?

Judge Sambre has deep roots in Nagpur and, according to his biography on the Bombay High Court website, is well connected in the legal fraternity in Nagpur. Sambre was born in Nagpur, became a lawyer there, practised in the High Court of Bombay at Nagpur, was the Secretary of the High Court Bar Association of Nagpur, represented Governor of Maharashtra in the High Court at Nagpur, and was appointed Government Pleader and Public Prosecutor, besides serving as standing counsel for various public undertakings and statutory bodies. He was elevated as an additional judge of Bombay High Court on January 6, 2014.Judge Sambre’s appointment to the Bombay High Court was not without controversy. Two Nagpur-based lawyers, Satish Uike and BM Lonare, had asked then President of India Pranab Mukherjee to intervene and stop Sambre’s oath-taking ceremony.

The Times of India reported on January 4, 2014 that Uike and Lonare “had pointed out “that a judicial magistrate first class (JMFC) here has passed an order with serious ‘criminal’ findings against Sambre on December 30, 2013.” They also pointed to another case against Sambre in which Rashtrapati Bhavan has asked the state’s chief secretary to look into the allegations.”“Is it a coincidence that the Sohrabuddin fake encounter case went to Sambre’s bench?” asked Uike, who has been a whistleblower in the case around the mysterious death of CBI Judge BH Loya.A whole lot of coincidences, and no answers. Yet.Meanwhile, the Sohrabuddin fake encounter case is not going well for the CBI in the trial court in Mumbai. Just yesterday, April 5, 2018, the 48th witness out of 66 witnesses in the case, turned hostile.