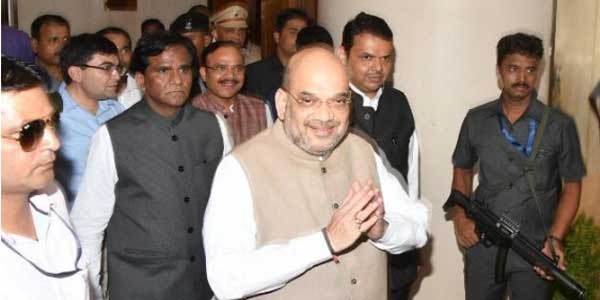 Mumbai: BJP president Amit Shah met the state executive committee of the Maharashtra BJP last night to take stock of the political situation in the state.

Chief Minister Devendra Fadnavis and state BJP chief Raosaheb Danve were among those present at the meeting late night at the state government’s guest house, Sahyadri.

Sources in the BJP said Shah discussed the political situation in the state, especially after the two Lok Sabha bypolls, in which the BJP retained Palghar and lost Bhandara-Gondiya to NCP.

“Preparations for the 2019 polls and how to ensure that programmes and policies of the state and central government reach the common man were the issues which were discussed,” sources said.

Meanwhile, Mumbai Congress chief Sanjay Nirupam claimed that the BJP violated the model code of conduct in force for the coming Legislative Council polls by holding a political meeting at a government guest house.

The election commission should take necessary action, he demanded.