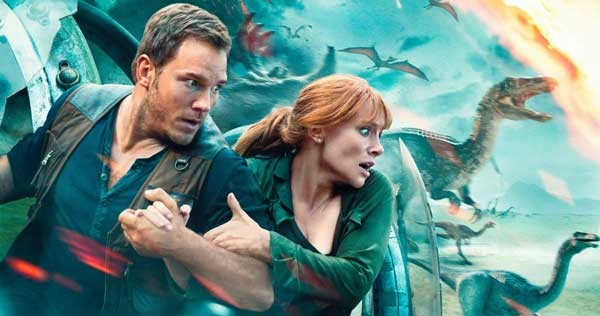 Steven Spielberg’s ingenuity and vision in building a world of prehistoric awe and scale made us care. At the heart of its spectacle, Jurassic Park (1993) had something valid to say about man’s tendency to tamper with nature.

There are scores of dinosaurs in Jurassic World: Fallen Kingdom too — the fifth in the franchise and second of the Jurassic World trilogy — but the only thing to emerge out of their power play is Hollywood’s endless appetite for playing by the numbers.

Everything comes down to magnitude and prolonging an idea by shamelessly feeding off the original’s legacy and Jeff Goldblum’s spunk.

Fallen Kingdom is not a terrible movie, but an uproariously silly one where dinos love and hate collide around endangered and hybrid species to suggest some elusive ideas of coexistence and looming threat.

What distinguishes it from its 2015 predecessor, whose sexist stereotyping of its leading lady continues to rankle, is a refreshing lack of conceit and wholehearted acknowledgement of its B-horror ideals.

New director J A Bayona’s resolve to keep things cold and creepy is evident in an eerie opening sequence that evokes Jaws.

Everything about its dangerously dark, stormy night screams bad news except to the team diving under water to collect DNA samples.

Fallen Kingdom prides itself on such idiotic contrivances where characters make it point to go looking for trouble.

What kind of a moron walks into a cage of a work-in-progress Indoraptor?

Fallen Kingdom is every bit a horror film split into predictable hostility and periodic close calls. And so while the bad guys are point blank gobbled down, the nicer folks have to make a run for it.

Doors get jammed and open right before a ravenous beast can sink his teeth into a fella’s leg.

Blood samples are drawn out of a tranquillised T Rex all the while teasing the viewer with the possibility of a potentially hazardous situation.

His spooky, sprawling mansion is stuff gothic novels are made of and a significant setting for a bizarre creature auction and The Shining-like pursuit of a mysterious kid who knows too much.

As the unwitting ‘parents of the new world’ Bryce Dallas Howard and Chris Pratt channel all their energy in scramming through stampedes and saving the dinosaurs. Their oddball charm is lost on Fallen Kingdom’s humourless landscape and confused empathy.

Between the teeming clichés, corny exchanges and devised action, Jurassic Park: Fallen Kingdom often feels like a job disguised as a movie.

Call it the curse of franchise or a line Goldblum says, ‘Genetic power has now been unleashed, you can’t put it back in the box.’