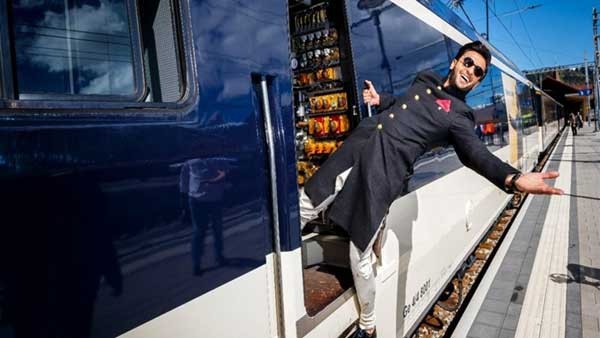 Bern: Bollywood star Ranveer Singh on Monday inaugurated a ‘Ranveer on Tour’ train, which is in honour of his contribution to the increasing popularity of Switzerland as a preferred destination for Indian tourists.

The train is on the Golden Pass Line, and has been launched by Switzerland Tourism and the Swiss Travel System. Ranveer is thrilled. “The ‘Ranveer on Tour’ train is not just transport, but an unforgettable journey that takes you on a panoramic journey of Switzerland. “Looking through the huge panoramic windows of the train is a feast for the eyes as you drink in the beautiful views of tall mountains, green valleys and endless vineyards.

“I still remember being completely mesmerised on my first train ride last summer and I hope all our esteemed travellers enjoy this incredible ride as much as I did,” the “Padmaavat” star said in a statement.

The train has been branded with pictures of the actor. The ride offers views of the changing landscapes of the Lake Geneva Region, and will take its passengers from Montreux, through the Unesco world heritage vineyards of Lavaux and the Jura mountains to the Bernese Alps.

Martin Nydegger, CEO, Switzerland Tourism said the Indian market is fundamentally important for them. “In 2017, activities to promote Switzerland in India have resulted in a strong increase of 23.4 per cent in overnights,” Nydegger said, adding that the campaign with Ranveer as brand ambassador has contributed to the success.

According to Maurus Lauber, CEO, Swiss Travel System, the number of Indian travellers using the Swiss Travel Pass has doubled since 2013. With the Golden Pass Panoramic train named after Ranveer, Lauber hopes more Indians will be inspired to travel on the route.