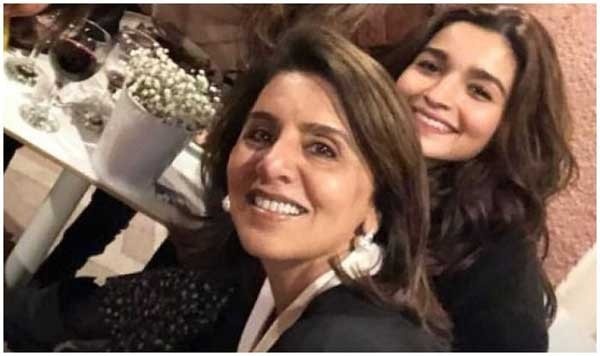 Rumour mills have been abuzz about Ranbir Kapoor and Alia Bhatt‘s secret affair and the joint appearance at Sonam Kapoor – Anand Ahuja’s wedding reception added fuel to the fire. In fact, sources close to the stars, in a statement to an online portal, revealed that the duo is very much together and have mother Neetu Kapoor’s approval too. However, it seems that Alia and Ranbir like to keep their relationship under wraps. The duo haven’t spoken about their relationship in open yet and when Alia was asked for confirmation, the Raazi actress refused to comment, stating that she strongly believes that ‘silence is golden’, and that she believes in keeping her personal life, personal.

Speaking of Neetu Kapoor, it is quite evident that the veteran actress is very fond of Alia. In fact, the two have been bonding ever since the Alia’ birthday celebrations in Bulgaria. The actress celebrated her birthday with the cast and crew members of her upcoming film, ‘Brahmastra’, while the reports suggested that Ranbi’s mother Neetu flew down along with husband Rishi Kapoor to Sofia, Bulgaria to join in at the birthday celebration. And now, Alia’s latest post just goes to prove that RK’s mom is bonding big time with his rumoured girlfriend.

Alia Bhatt, on Mother’s Day, took to social media handle to share a beautiful picture of her posing with her mother Soni Razdan and captioned the post as, “Hello beautiful mommy. It’s your day. Today & everyday ✨” On this post, Ranbir’s mother Neetu Kapoor commented, “Aww” along with hearts, while Alia, a couple of days later, responded to Neetu’s comment with emoticons of kisses.

On the professional front, Alia, who is currently riding high on Meghna Gulzar’s ‘Raazi’ success (the film that also stars ‘Masaan’ fame Vicky Kaushal in a pivotal role), will be seen in Zoya Akhtar’s Gully Boy opposite Ranveer Singh. Watch this space for further updates.