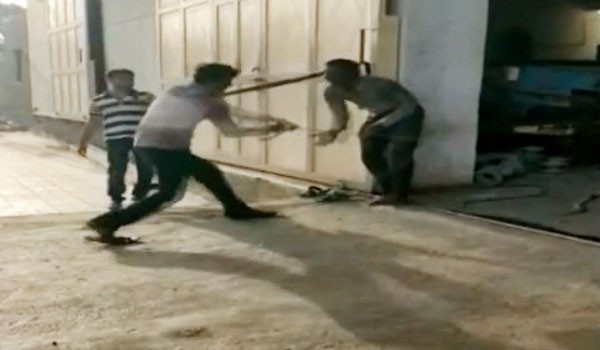 New Delhi: A Dalit man, bound by ropes around his waist, is beaten mercilessly with rods while he cries out in pain, in a video clip allegedly from Gujarat’s Rajkot. The man died after the savage beating on the orders of an auto-parts factory owner, according to a police complaint. His wife was allegedly beaten up too.

The man, identified as Mukesh Vaniya, winces and screams as he is flogged by two men in the disturbing footage tweeted this morning by Gujarat lawmaker Jignesh Mevani.

“Mukesh Vaniya belonging to a scheduled caste was miserably thrashed and murdered by factory owners in Rajkot and his wife was brutally beaten up,” he tweeted with the hashtag #GujaratIsNot Safe4Dalits.

Five people, including the factory owner, have been arrested on charges of murder and under the law on atrocities against Scheduled Castes and Scheduled Tribes.

“We have arrested five people, including the factory owner. I cannot reveal his name yet as it’s not mentioned in the FIR (first information report). A murder case has been filed under the SC/ST Act and a deputy rank officer will probe the case,” Rajkot senior police officer Shruti Mehta said.

On Sunday morning, Mukesh Vaniya and his wife, both rag-pickers, were using magnets to look for scrap when some factory workers confronted them, accusing them of theft.

The woman escaped to get help from their village nearby. By the time she returned with some people, Vaniya was prone on the ground. He was pronounced dead in the hospital.

Jignesh Mevani’s post describes the incident as “worse than the 2016 Una attack”, in which four Dalits were stripped and thrashed by cow vigilantes while they were skinning a cow that had been electrocuted.

“This is a far more gruesome incident than Una. In Una, the victims were beaten up and humiliated. Whereas, here a man lost his life amidst caste violence… The government of Gujarat has still not learned from its past mistakes,” Mevani wrote on Facebook.

The Una incident provoked protests by the community and led to the prominence of Dalit leaders like Jignesh Mevani, who contested and won in the Gujarat election last year.

—As Published in NDTV