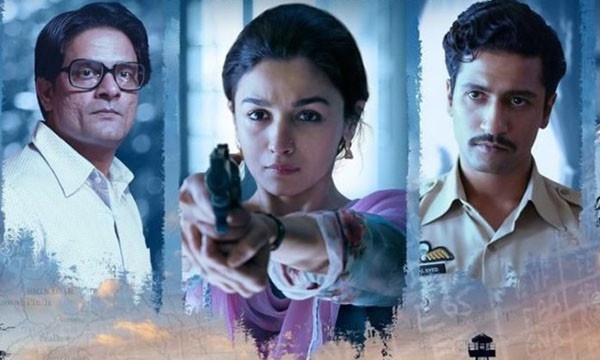 A Delhi University girl follows her father’s footsteps and decides to become a spy in Pakistan. It’s not just the sacrifice of a life full of promises, but also the end of basic securities. This is a tradition she has picked in her house of Kashmiri patriots. Somewhere in the middle of being a vulnerable wife and a trained agent, she is walking the razor’s edge. One mistake and her cover is blown. What is even more scary is that she’s slowly losing out to her emotions, and it could cost her dearly.

This is 1971. The diplomatic relationship between India and Pakistan is tense because of Mujibur Rahman’s activities in East Pakistan. The two countries are on the brink of a war and information is their most lethal weapon. Sehmat Khan (Alia Bhatt) is married in a family of high-rank Pakistani army officers. Her assignments include trespassing the uncharted territories and making key information available to the Indian government.

Based on Harinder Sikka’s book Calling Sehmat, Raazi is an account of the life of Indian agents of that time. Though the focus is on Sehmat, director Meghna Gulzar also ensures that Raazi gives us a peek into the dangerous life other agents of the time led.

After a couple of initial scenes between Hidayat Khan (Rajit Kapur) and Khalid Mir (Jaideep Ahlawat), in which they document the generalised sentiments in India during that period, the focus shifts to Alia Bhatt, and she soon takes the charge. While Meghna keeps it simple by not going overboard and showing the agents in the most human way possible, Alia gets the mannerism of a conflicted agent right. Together, they embark on a journey where you understand the meaning of being behind enemy lines. It’s not your life, but it could be someone you know.

Alia’s Sehmat is far from the glamourised version of spies you usually find in Hindi films. She is gritty yet tears up frequently. She blinks before the opponent and acts faster than expected. She is lethal, but it’s not in her habit. Like other girls of her age, she also has desires, but they don’t dilute her determination. Her transformation is not dramatic, but a natural progression in dangerous circumstances.

You remember Talvar? Meghna concentrated on getting to a conclusion through a conversation. She presented her narrative through dialogue between all the parties. There wasn’t any definitive theory, at least in the beginning. In a way, she adopts a similar strategy in Raazi: She places her lead in adverse situations without making anyone the villain. She lets us take sides.

Vicky Kaushal’s Iqbal, Alia’s husband in the film, is the most transparent of the lot. He is yet to understand the situation in its entirety and that makes his situation even worse than Sehmat. Such finesse is character graphs make Raazi a powerful drama without going overboard. The audience walks alongside them.

Bhavani Iyer and Meghna Gulzar’s detailed screenplay slowly grows on us. It begins like Minecraft and every block finds its place as the game proceeds. Like pottery, Meghna supports the base first and then engraves it with colourful designs. In the process, actors like Jaideep Ahlawat and Vicky Kaushal are able to showcase their calibre.

The film is a welcome relief to our senses. Unlike other ‘spy’ films, Razzi refrains from being loud or jingoistic. The characters here don’t mention their motives in a menacing tone and spies don’t appear having a good time. They don’t break into a song either, but that doesn’t mean songs don’t contribute to Raazi. In fact, numbers like Ae watan and particularly Dilbaro help you realise the gravity of the situation.

Raazi marks another step in the right direction for Alia. It required her to be restrained and mature, and she simply grabbed the opportunity with both hands.

Raazi doesn’t try to be very cerebral and that works tremendously in its favour. The tactics of espionage are explained in the simplest manner. Also, the film chronicles a time where a lot depended on the agent’s mental prowess than the technological advancements. That way, actors also get a chance to explore their abilities.

Though Meghna’s comments on war, cross-border activities are very simplistic and obvious, she reinforces them for us with stretched scenes. She leaves her subtlety, the highlight of Raazi, towards the end, and makes her intentions known in as many words. However, her change of stance comes late in the 140-minute film, and by then, the audiences would have made up their mind.

The actors sometimes falter with their accent and dialect, but intrigue around Sehmat’s adventures doesn’t give them much time to complain. Raazi is a sensibly written and finely performed film that takes a close look at the ordinary lives of extraordinary people.