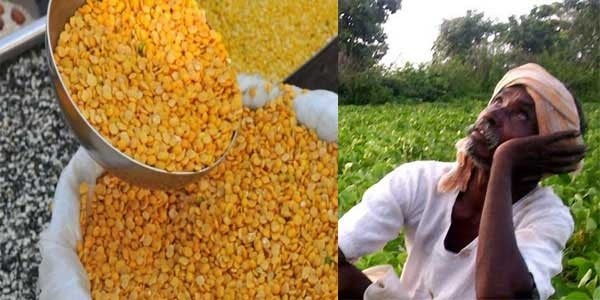 Mumbai: The Maharashtra government would provide financial grant of Rs 1000 per quintal to those farmers whose tur and gram could not be purchased by the administration before the May 31 deadline, Chief Minister Devendra Fadnavis said today.

“The government has taken an important decision for farmers. We will provide a financial grant of Rs 1000 per quintal for farmers, subject to verifications, whose tur and chana were not purchased by us,” Fadnavis told reporters after the weekly cabinet meet.

The state government had set up tur procurement target of 44.6 lakh quintals.

Farmers in Maharashtra like their counterparts from other states have been demanding better remunerative price for their produce, a complete loan waiver, and implementation of recommendations of the Swaminathan Commission.

The Centre had extended the deadline for tur procurement in Maharashtra till May 31 this year.

Fadnavis said the government would also give a financial aid of Rs 160 crore to farmers whose crops got damaged due to unseasonal rains or hailstorms.

“To aid milk producing farmers, the government had earlier decided to give a special subsidy for converting milk into milk powder. We are now thinking of giving an export incentive to farmers to further monetise their produce. We have formed a team that will look into the issue,” the CM said.

Among other decisions, the Cabinet approved a proposal for construction of a 100-bed cancer hospital on the private partnership basis with Tata Trust in the premises of the Government Medical College and Hospital at Chandrapur in east Maharashtra.

A Special Purpose Vehicle (SPV) will be set up for monitoring the construction of the hospital.

“A ten-acre plot will be given on a lease for 30 years on nominal rent for the construction of the hospital,” said an official from the Chief Minister’s Office (CMO).

The official said the state government would provide a grant of Rs 20 crore for the purpose for the first seven years.

The Cabinet also decided to allot Rs 5 crore per year to each of seven cantonment boards at Pune, Aurangabad, Ahmednagar, Kamptee, Khadki, Dehu, and Deolali for providing basic civic amenities like road and water supply.

The cantonment boards fall under the jurisdiction of the Defence ministry.

“These boards will remain under the jurisdiction of Defence Ministry but the funds for implementation of basic civic and infrastructure facilities will be provided by the state government,” the official said.

The Cabinet also approved the state’s contribution in the implementation of the National Nutrition Mission 2018-19 in 85,452 anganwadi centres across 30 districts of the state under the Integrated Child Development Scheme (ICDS).

The Cabinet also approved allotment of Rs 5 crore per year to law universities situated in Mumbai, Nagpur and Aurangabad for meeting administrative and academic expenses for the next five years, the official said.

The Cabinet has decided to amend the Maharashtra Mines and Minerals (Development and Regulation) Act to ensure adequate and regular mineral supply for important projects.