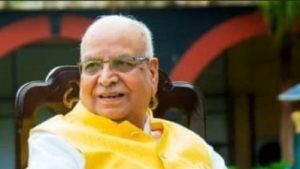 Madhya Pradesh Governor Lalji Tandon breathed his last on Tuesday, days after he was put on ventilator support in Lucknow’s Medanta Hospital. Tandon, 85, was first admitted to Medanta on June 11 following complaints of fever with difficulty in urination. Later, he was diagnosed with liver and urine infection.

His health condition worsened again on July 16, following which he was put on ventilator support. Doctors stated that his condition continued to deteriorate as lungs, kidney and liver were not functioning properly.

Tandon’s son Ashutosh Tandon put out the news on Twitter.

Born and brought up in Lucknow, Tandon got associated with the Rashtriya Swayamsevak Sangh (RSS) and erstwhile Jan Sangh when he was young. However, his links with saffron politics never limited his outreach and connections with people from different sections of society.

Having started as a corporator in early 1970s, Tandon entered the upper house of the UP legislature a decade later. However, his meteoric rise within the BJP and saffron politics came with Atal Bihari Vajpayee’s entry in the electoral race from the constituency of Lucknow in 1991.

His stature then grew was election manager for Vajpayee. As Vajpayee gradually withdrew from the political arena because of ill health, Tandon was the natural choice for replacing him as the BJP candidate from Lucknow in the 2009 parliamentary elections. He was elected to the 15th Lok Sabha by a margin over 40,000 votes over Rita Bahuguna Joshi of the Congress.

In 2014, as he was denied a poll ticket and was forced to pave the way for Rajnath Singh, many thought it was the end of the political journey for Tandon, a man well versed in the “Atal school of politics” that seems lost in the era of Narendra Modi and Amit Shah.

However, Tandon’s old-school practice of patience and buying time in politics didn’t go in vain. He got the governorship of Bihar in August 2018 and was then shifted to Madhya Pradesh in 2019.