The Opposition Leader in NMC, Vikas Thakre, was left with a red-faced after his Ward areas were starved of water supply since past 8 days . The enraged Thakre asked the Mayor Anil Sole to either improve water supply or resign. “The best way for better water supply is to get rid of irresponsible OCW which is incompetent, too,” Thakre said. 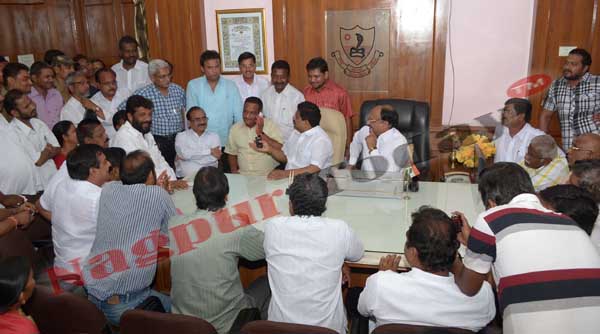 File Photo : Few Days back Vikas Thakre has led people of his ward to NMC office to protest against OCW

Nagpur News:  With soaring of temperatures in the fire-spitting summer  which has created a hell of a situation for Nagpur citizens, the serious water crisis is adding terrible problems and working  as fuelling the burning citizens who see no respite from both atrocious situations within a short period.

The Orange City Water (OCW) was targeted for creating a horrifying situation on water supply front thus putting the Nagpur citizens in an intolerable position since the past two months.

The Opposition Leader in Nagpur Municipal Corporation (NMC) and a senior Congress leader Vikas Thakre, in a press conference, blasted the OCW, which has been given contract for 25 years by NMC, saying the Nagpur citizens will be harassed, tormented, and tortured just not for this summer but for 25 years at the irresponsible hands of OCW authorities. Thakre further said, previously when the NMC itself was looking after the water supply to Nagpur, there were few incidents of water supply shortage but since the OCW was given the responsibility, not a single day has passed without water shortage not just in summer but throughout the year.

“The reason for grave water crisis is that OCW is not equipped with itself the skilled manpower needed to handle water supply to a big city like Nagpur. Moreover, the attitude of OCW bosses is insensitive towards common people. The outcome of all these aspects is that all Corporators across party lines and the harassed citizens are waging a war of a sort on NMC Administration and are demanding to get rid of OCW as soon as possible,” Thakre asserted. He further said, the OCW is blessed by a bigwig politician from Nagpur. That is why, Thakre said, the OCW is having a sway over the NMC Administration and neglecting people’s problems with impunity, claimed the Opposition Leader.

The most disturbing factor of all this OCW mess is that Vikas Thakre’s ward areas were starved of water supply since past 8 days leaving Thakre red-faced and spitting fire on OCW. Thakre and his Congress Corporators had met NMC Commissioner Shyam Wardhane and had apprised him about water shortage crisis but in vain. Thakre even charged that the Mayor Anil Sole and NMC Commissioner are finding themselves helpless in reining in the OCW with a heavy hand. The OCW is not capable to handle water supply to such a big city, and should be kicked out by the NMC, an enraged Thakre said.

Thakre vociferously demanded to Mayor and NMC Commissioner to get rid of OCW and hand over the water supply responsibility to Water Works Department of NMC and provide a much needed relief to Nagpur citizens as soon as possible. “Moreover, to find waste material in drinking water is like playing with public lives,” Thakre charged. “Is nobody responsible for this utterly harmful issue?” Thakre himself answered to the question saying the incompetent OCW is responsible for all ills as far as water supply is concerned.

“The concerned Water Project, Water Works Department and OCW authorities were playing blame game for the grave water crisis. The NMC Commissioner had taken note of this dirty blame game and had assured action in this regard but nothing happened. It appears, the Commissioner lacks will power to take action against the irresponsible officials,” Vikas Thakre claimed. Similarly, there is chaos in supplying water through tankers as no higher authority is monitoring the movement of tankers, Thakre said. “The Mayor, too, lacks daring needed to bring OCW in order and create water supply a smooth process,” Thakre said with a smile.

Thakre warned that from tomorrow onwards he will make the OCW officials run wherever the water supply is not in a proper way.

Thakre, as a final stroke, demanded Mayor to either improve the water supply situation or resign for failure on water supply front. “The best way to better water supply is kick out the OCW as soon as possible,” Thakre roared.

The Mankapur Ward Corporator Arun Daware was prominently present at the press conference.