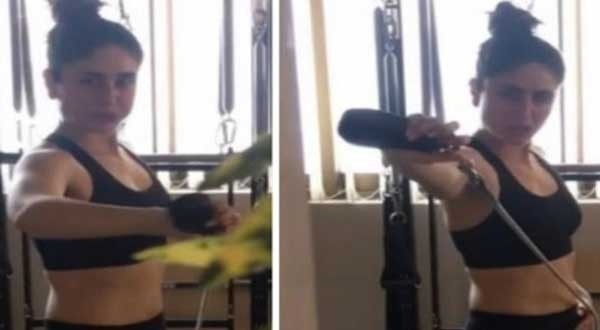 Kareena Kapoor Khan is that one actress in Bollywood who is known for zero size figure. She got back into the well-shaped body in no time after her pregnancy. Recently, she is in a lot of buzz for her upcoming movie Veere Di Wedding and for partying like there is no tomorrow in Sonam Kapoor’s reception. Kareena has posted a video of her workout session on social media and yet again she sizzles in the intense workout mode.

Kareena is seen wearing black sports apparel with a messy hair bun. On a plank-like exercise machine, she is seen sitting on the knees and doing a stretching exercise. She is not the only actress who has uploaded a workout session video. Previously we have seen Deepika Padukone, Shilpa Shetty, Gul Panag also sharing their workout regime on social media.

Kareena Kapoor Khan is gearing up for her upcoming film ‘Veere Di Wedding’ release and soon will be busy with the promotions of the film. The trailer and audio box of the film has received a positive response from the audiences. The film is based on the life of four girls in the backdrop of Delhi who is trying to deal with relationships and societal perceptions. The film also features Sonam Kapoor, Swara Bhaskar and Shikha Talsania in pivotal roles. The film is slated to release on June 1, 2018.