The old elements of NDA which had joined hands during Atal Bihari Vajpayee’s regime have now separated. If they join again the alliance will be strong again. This time Sharad Pawar’s need will not be felt.  But even if he comes into NDA fold I will not separate from the alliance. These were the comments of RPI leader Ramdas Athawale’s at the press conference indicating his affection and inclination to Sharad Pawar. He has been elected on Rajya Sabha due to the support of BJP-Sena led alliance and Athawale did not forget to remind that the alliance will be benefited by his presence on Rajya Sabha. After being elected unopposed he also thanked BJP leaders.

He said with his election BJP’s quote is completed but the Sena has to do its role. Athawale further said that he has joined the alliance for the much needed social change and hoped that a new era of social change narrowing  the gap between upper and lower castes will soon begin. He said though there are differences of opinion still everyone has the freedom to choose the group he wants to join. Even the Congress factions also differed on the foreign collaborations etc. still they came to together to share power, so no one should be surprised by his decision to join BJP-Sena alliance. It is the social justice for which he has been chosen. Even Congress, NC leaders also praised him. He said he was also showered appreciation from foreign countries too. He claimed to raise the Maharashtra related issues in Rajya Sabha.  Athawale further said that he will look into issues of farmers suicides, industrial development and taking into consideration the cotton production in Vidarbha region he would strive for getting cotton mills for Vidarbha on co-operative basis.

Along with Center, State will have NDA rule

There will be NDA’s rule in the center. For this out of 48 NDA’s share will be  34, 35 seats. In State Assembly NDA will rule. NDA will definitely get 175-177 seats out of 288 in state, Athawale predicted. He has demanded 3 states for his faction. These include Ramtek and Wardha constituencies. He gave a clear signal of Dr Anil Bonde’s candidature from Wardha. He expressed that  if assembly arrangements are finalized in a months time, that will have advantage for the Lok Sabha election strategy. Athawale also expressed his expectation of minimum of 30 seats for assembly elections.

Protest march to Assembly on February 25

For raising the voice on the issues like inflation, corruption, atrocities RPI will lead protest march to State Assembly during the budget session, Athawale informed at the time. He demanded more provisions for downtrodden in proportion to their population. 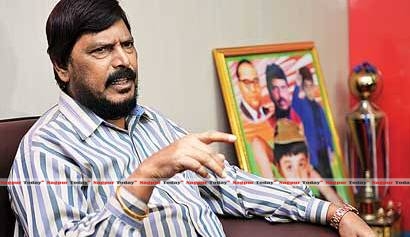