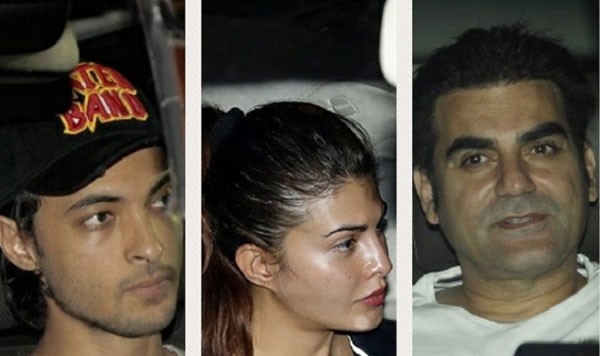 After being sentenced to five years imprisonment in the 1998 black buck poaching case, Salman Khan has been lodged in the Jodhpur central jail. Since then, Bollywood celebrities have been thronging to the superstar’s residence since yesterday. Right from Daisy Shah, Ramesh Taurani to Sonakshi Sinha were spotted at the 52-year-old actor’s residence.

The actor’s bail plea was to be heard in the session’s court today but it has been postponed till tomorrow. The actor is reportedly spending the night in jail today. His sisters, Arpita Khan Sharma and Alvira Agnihotri, are in Jodhpur to give their brother some support. Earlier today, they met with him for a little while. Meanwhile in Mumbai, the actor’s residence was visited by Jacqueline Fernandez, Arbaaz Khan, David Dhawan, Waheeda Rehman and Aayush Sharma. The actor’s brothers, Arbaaz Khan and Sohail Khan along with friend Sajid Nadiadwala will be flying to Jodhpur to give the actor some moral support. Take a look at the pics of the visitors from earlier today.

Reports indicate that Salman Khan has not made any special requests and as per news reports he started his day at 8.15 am, following which he met his close friend Preity Zinta, who flew in to meet the actor. According to reports, Salman Khan lost sleep on his first night in the jail and it looks like his fans will be spending a sleepless night as well, as they wait for the #SalmanBailOrJailverdict tomorrow.