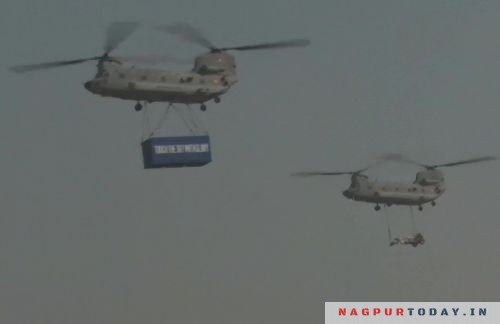 Nagpur/ New Delhi: The grandeur and might of the various types of aircraft in the Indian Air Force were on full display on the occasion of the 88th Air Force Day celebrations on Thursday.

The newly inducted Rafale fighter jet displayed its ability to carry out sharp turns during the flypast at the IAF base in Ghaziabad on the occasion.

The Rafale flew in the ‘Vijay’ formation, flanked by two Jaguars and Mirage 2000 each.

It also carried out a minimum radius turn within an area smaller than a hockey field forming a figure of eight.

Further, the IAF also showcased its heli-lift capability with two Chinooks carrying a container and a field artillery gun underslung over the parade venue.

The tandem-rotor helicopter is one of the most reliable and efficient heavy-lift helicopters around the world.

Chinook, with its operating ceiling of 20,000 feet, will redefine heli-lift operations in the country that includes operations like inter-valley transport of troops, airlifting artillery guns and heavy underslung loads for the Border Roads Organisation.

It can also be used to deploy artillery guns at high altitude positions with the China border in the northeast.

The Eklavya formation, including Apache and Mi-35 attack helicopters, also fired flares as a part of the display of the prowess of the aerial wing of the defence force.

Apart from this, the fighter jet also carried out vertical charlie manoeuvre and formed the ‘Trishul’ as part of the IAF’s anniversary day celebration.