Alcohol can destroy life of the one consuming it and their love ones. In a similar case, mother of a young woman who got married only a few months ago, lodged a complaint with Jaripatka police and alleged that her drunkard son-in-law set her daughter ablaze.

On November 20, Snehal Roshan Beg (23) was set ablaze in residence near Dhammakuti Buddha Vihar, Takshashila Nagar. On the complaint of her mother Kamal Suresh Rahate (50), Jaripatka police registered a case of accidental and had started the investigations.

Kamal informed the police that Snehal had tied the nuptial knot with Roshan Beg Mustafa Beg at Koradi Mandir three months ago. They rented a house after marriage. Kamal alleged that Roshan was a regular drinker. On November 20, Roshan was present with Snehal when the fire broke.

However, Roshan was not injured in the fire while Snehal sustained serious burn injuries and later succumbed. Kamal alleged that Roshan poured kerosene on Snehal and set her ablaze.
With investigations turning to different angel, Jaripatka police immediately booked Roshan and registered an offence under Section 302 of the IPC. 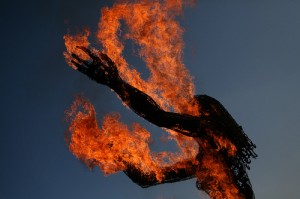